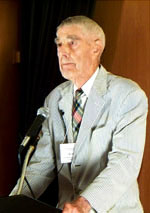 I just returned from a nice little luncheon given by the Heartland Institute (www.heartland.org) in beautiful downtown Chicago, Illinois. The purpose of the gathering of free-market supporters and like-minded individuals was to celebrate the life’s work of famed economist and Nobel Prize winner Milton Friedman.

The principal speaker was Richard H. Timberlake*, student and friend of the celebrated economist and an accomplished free-market economist in his own right.

I’ve done several such events for some of the conservative think tanks and state policy groups in the Windy City and I enjoy these events in Chicago because I always get the uneasy feeling that our little conclave of right-thinking fellows well met is the last vestige of civilization and that we are putting on the timbers to secure the gates as the barbarians mount their attack. The barbarians of which I speak are, of course, the city full of Democrats and socialists that looms on all sides surrounding our little events.

But I digress. Mr. Timberlake’s talk was very informative but can be boiled down to a few main points.

And this one is the most salient of them all…

Mr. Timberlake began his talk retracing some of the early 20th century history of the fed and he made a point that I was not aware of. In the late 1920s and into the early 30s the fed actually instituted a policy that it termed “direct pressure” on America’s financial milieu in order to punish “speculators” and that policy overtly levied against the country’s economy actually, in Timberlake’s opinion, “initiated the catastrophe” of The Great Depression. So, far from just reacting to the depression — and badly at that — the fed actually caused it.

During the question period one of the things that Mr. Timberlake said concerning the government’s gold stockpile got a hearty agreement from the assembled. We should empty the govt’s gold stockpiles and return ownership of gold to the people, Timberlake advised.

After all, what is the government doing with all that gold? We aren’t using it to back our fiat paper money. So why has it been squirreled away hundreds of feet beneath the earth? As Richard Lorec of America’s Future Foundation said to me after the event, “we spend all that time, sweat, and blood to dig all that gold out from beneath the earth only to build vaults underground and put it all right back again.” Man is a strange creature, isn’t he?

In any case, I had a great time and thanks to Zack Christenson of The Heartland Institute for helping me with the arrangements.

*Dr. Timberlake, professor emeritus of economics at the University of Georgia, has chafed at what he considers misrepresentations by some Federal Reserve policymakers of Dr. Friedman’s views to justify wholesale intrusion into the U.S. economy. “The monetary excesses that current Fed policymakers have put into place in the banking and financial systems are a pending nightmare,” Dr. Timberlake has warned.