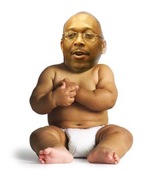 One of the main reasons that little Todd Stroger lost his comfy job as president of the Cook County Board — the office left him by his deceased father — is because of the graft and payoffs to his friends and family members that he constantly perpetrated. It was so bad even Democrats were ashamed of him and voted him out of office in the last primary.

But thanks to the fact that Illinois Democrats moved the primary to February President Stroger has eight months to continue giving his friends and family members cushy jobs paid for by the County taxpayers. And this week he’s done it again.

This time Stroger has given a plum job to his former campaign manager, Vincent Williams. Williams now has a $38,000-a-year job on the Cook Zoning Board of Appeals thanks to his pal President Stroger.

Let us recall that Williams was the campaign manager of a losing campaign, shall we?

Stroger, who lost his bid to keep his job to Toni Preckwinkle in the February primary, has been knocking himself out giving gifts to his buddies knowing that soon he’ll be on the outside looking in. Even hardened machine hacks like Democrat Edwin Reyes is uncomfortable with Stroger’s obvious graft, influence peddling, and payoffs to friends.

“It’s the same old story –these guys that worked on the campaign, he’s trying to take care of them now,” Reyes said. “I don’t want to be judgmental about the guy, I want to be fair and objective about him, but I want to talk to the other commissioners about this.”

For a Chicago-way pol like Reyes, that is pretty harsh language.

Anyway, this is the legacy of Todd Stroger’s presidency. Gifts to pals, payoffs to campaign workers, free County cash to family members… too bad doing the people’s business is nowhere in that mix.