Princess Leia Found Her Darth Vader: It's You and Me 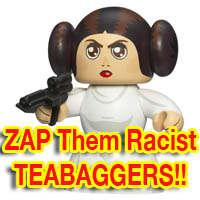 Well, she’s a former alcoholic, drug addict, washed up actor, shock therapy patient (no, really) and one-time princess to the universe, but now Carrie “Princess Leia” Fisher can add one more calumny to her long list of off-kilter, personality deficits: she’s a “teabagger” hater. So, she’s got that going for her, which is nice.

Hawking another one of those prosaic celebrity tell-alls, Fisher spoke to the folks at the entertainment site PopEater.com and when the subject of Obama and the Tea Party movement came up, the one-time heartthrob of nerds everywhere didn’t hold back. They are all “racists” she said.

PoEater.com asked Fisher if she had met President Obama; she hadn’t but wanted to. And then they asked the leading question of the day: “Do you think Tea Party is just people who are pissed that there is an African American president?”

Warming to the presented theme, Fisher took the bait at warp speed.

Yup, and the fact that they chose to call themselves “teabaggers,” which is slang for a certain act involving b***s. It sort of says a lot. I would say a mouthful. Looks like it’s very upsetting for them, but he’s brilliant. The thing is, he’s half white but that’s still not enough — for them it’s all white or f**k off. I think we don’t deserve him and certainly teabaggers don’t deserve him.

Like most of these so-called celebrities, Fisher reveals how ignorant she is of current events. Even simple truth evades her laser sharp mind. Of course, we all know that it was the ribald left that gave the name “teabaggers” to the Tea Party movement, they did not take on the epithet themselves. Seriously, does this spaced queen really think that a political movement would name itself after a crude sexual innuendo? Really? Is she that lost in space? (OK, no more space jokes)

Of course, her blind love of The Obammessiah is amusing, but so common in Hollyweird as to appear simply knee-jerk, unthinking, empty of any substance. “I love him,” the once popular actress gushed, “Hopefully I’ll meet him sometime. I’m just happy he exists.”

Happy he “exists”? Puhlease. This sort of hero worship of a mere politician is so un-American.

Anyway, there you have it, America. If you are a conservative, if you ever attended a Tea Party event or wanted to, you are a b*** juggling racist that wants to wrap the country in a white bed sheet. Nice that Princess Leia thinks that half the American electorate are such evil, monsters, isn’t it?