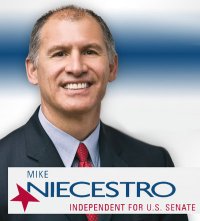 Greg Hinz of Crain’s is reporting that there’s a new candidate about to enter the race for Barack Obama’s old senate seat and he says he’s already got both the petition signatures and $1 million to spend on the race. He is west side mortgage broker Mike Niecestro.

The self-funded, self-proclaimed “disgusted Republican” and conservative says that there isn’t any difference between the two current candidates.

“There is no difference between Mark Kirk and Alexi Giannoulias,” Mr. Niecestro said in an e-mail. “Mark Kirk would not support the Arizona (immigration) law. I will. Mark Kirk voted for cap and trade. …I am a disgusted Republican who has had it with the people the party throws at us.”

Well, there’s no real way to dispute Mr. Niecestro’s characterization of Mr. Kirk. I have always called him a 45 percenter. Kirk votes with Republicans only 45 percent of the time on the major issues. He leans center left, not center right.

Nicestro is running as an independent but he is also running as a conservative. In fact, his slogan on the main page of his website is, “a conservative voice who will put government back in the hands of people like you…”