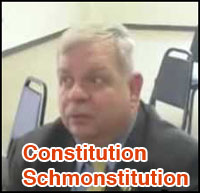 Congressman Phil Hare (IL, 17th District) is the perfect example of the sort of congressman no one should want. He’s arrogant. He’s dismissive. He’s self-important. He’s easy to anger. And worst of all he has disdain for his own voters. The man is simply a creep.

In April we had video of this arrogant cuss saying that he didn’t care about the U.S. Constitution in the Obamacare fight. Apparently that darned old rag of paper is meaningless to this powermad pol.

This time we have Congressman Hare intimidating a voter and demanding that this Vietnam vet supply the congressman with his home address so that he, the congressman, can track the constituent down and further threaten him.

What’s all the threats about? It’s Congressman Hare’s military record, a record that Hare is puffing up and using to mislead voters. By federal law Hare’s military service does not make of him a “veteran” of the Vietnam War. Now, Hare did serve, but he served in the reserves here in the U.S. during the Vietnam War. By law, however, reserve troops are not officially Vietnam veterans.

Yet Congressman Hare is well known to tout his service as a “Vietnam veteran” in order to appeal to other vets in the voting public. Because of these constant claims, one of his constituents confronted the congressman with his puffing up of his service. The constituent, a Vietnam vet himself, even had Hare’s own former commanding officer confirm that the congressman is not an official Vietnam vet. This confrontation, though, sent Congressman Hare into a typical fit of vitriol and anger during which he threatened the voter.

Here is the account from a letter sent to the Committee on Standards of Official Conduct in Washington D.C.:

On Monday, May 31, 2001, Mr. Hare and I were engaged in a conversation concerning the statements he is making around the district about being a veteran. After I pointed out that according to the law he is not a veteran, he became very upset and demanded to know my name. I refused to tell him my name, saying that this was about his claim of being a veteran and not about me.

Mr. Hare then told one of his aids who was with him, to follow me to my car and get my license plate number so he could find out who I was. I have since been told that Mr. Hare’s daughter works for the DMV.

… I asked Mr. Hare if he as a public official was going to use his official office to run name checks on private citizens, in order to intimidate them into not asking questions he did not want to answer.

As Mr. Hare was turning to walk away form me he paused, and turning back to my direction, he glared at me intently, and while leaning forward pointed his finger at me, and in a threatening and intimidating manner said, “I’ll find out who you are!” Given the nature of Illinois politics and Mr. Hare’s reputation as a mean politician, I felt intimidated by the power of Mr. Hare’s office and what he might do.

Imagine, a sitting congressman trying to threaten a citizen, demanding his home address in anger… and for what? Is he going to send his thugs around to this veteran’s home? Why would a congressman need a home address under such circumstances? What else could he possibly mean to convey to the voter but intimidation?

This is extremely disgusting behavior by a congressman.

Once again this is the perfect time to remind voters that there is an alternative in Illinois 17. Bobby Schilling is a newcomer running on the GOP ticket. Vote Schilling and be rid of this arrogant creep of a congressman.