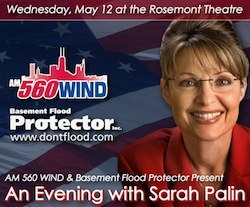 In the deep blue sea of the People’s Republic of Chicagoland, Sarah Palin shined like a light of liberty among the darkness of Mayor Richard “King” Daley’s perverse domain. Palin brought hope into the home of President Obama’s cynical “Chicago Way” style of politics, and I was there to witness the May 12 show.

Sarah Palin was her usual effervescent self, upbeat and positive about this great country and happy to appear before us. She reveled in her “aw shucks” persona built from regular Americana, a style that has made her dear to the hearts of so many Americans from coast to coast. 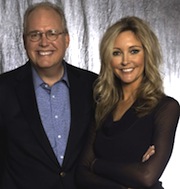 The show started with a little patter between Big John Howell and Amy Jacobson, the morning radio talkers from Chicago’s WIND AM. One of John Howell’s musician buddies performed a few songs for us and I have to say he was pleasant to listen to. Finally, just before the Governor addressed us, the ever avuncular and impressive Guy Benson — who has a Sunday evening show on WIND — entertained us with some political humor. 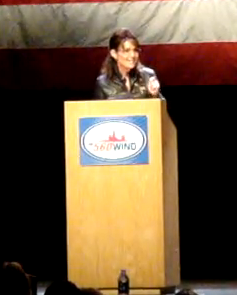 Then, when the giant curtains parted to reveal the governor, the applause was almost deafening so the evening started with an electric jolt. She immediately asked all U.S. military veterans to stand for recognition to a huge round of applause for her recognition and for ours of our vets.

One of the early things that Governor Palin brought up was this idiotic business of Highland Park High School whose administrators suddenly canceled its girls basketball team trip to Arizona. The team had won the right to play in a tournament for the first time in 26 years. Why was it canceled? Only because the tournament is in Arizona and school administrators are mad at the state. Disgustingly, these school chiefs are using these girls to advance their own political agenda. Palin was amazed that this school was ignorant enough to say Arizona is not a worthy place for their girls to visit yet the school is still sponsoring a trip to China! “Do you know how girls are treated in China,” Palin asked. Then to great applause she suggested that those girls might have to “go rogue.”

Palin went on to say that someone said that her trip to Chicago would be one into “enemy territory.” She told us all that she replied, “It’s Chicago, not MSNBC!” Palin had many little jabs at the left like this throughout the evening.

The governor focused on the economy, the Constitution and our American exceptionalism but also mentioned the evils of Obamacare. But Palin’s main focus was on the November elections and her main goal was to stir voters to support conservative Republicans in the upcoming elections.

Like most conservative speakers, she invoked Ronald Reagan a lot, which is to be expected. On bipartisanship, for instance, Palin asked about politicians that were “all about bipartisanship” and she wondered “where’s the backbone” of those that run claiming they want bipartisanship. “Reagan didn’t govern with the singular goal of being bipartisan,” she told us. “He fought for common conservative principles and then he invited the other side to join him!” But while on the subject of principles, Palin also warned against too much inter-party attacks on RINOs and the like.

Recently Palin has been beaten up by her own side over her choice of Carly Fiorina for California’s Senate seat instead of the tea party supported and long-time California conservative Chuck DeVore.

Palin began to address this RINO hunt situation by saying that “There’s been a lot of talk about who’s the RINO and who isn’t… some of it isn’t always fair” to which someone in the audience yelled “Mark Kirk” to the applause of many hundreds in the audience. Palin didn’t address Kirk, but went on to address her own tete a tete with conservatives over her Fiorina endorsement.

I’ve been getting a lot of flak lately for endorsing a pro-life, NRA member, pro traditional marriage, pro business, anti-big government, anti tax and spend, anti cap and tax conservative who running in California — yes there is one in California… in California I think if you’re willing to call yourself unabashedly conservative in a deep blue state like California then how are you not the real deal when you are all these things that we just listed, it would be traditionally “yes,” a conservative, a Republican would stand for. I don’t want to see this candidate discredited just because some are more supportive of another in the candidate race. We want to elect principled candidates and principled conservatives, but the keyword is elect and in November, folks, that is what it’s all about. It’s about taking the gavel away from Harry and Nancy!

It was also refreshing to see such a high profile person in the political world be so un-embarrassed by her belief in God. These days so many pols either sound cynical when they discuss their Christian beliefs or they refuse even to bring it up. But Palin seemed quite sincere in her beliefs and reveled in them.

After Palin’s address, Howell and Jacobson came out and joined Palin for a few questions. Only one intrigued me, though. Howell affirmed that Palin had charisma to spare and he wondered that if she could imbue another Republican candidate with some of her charisma who would it be? Palin began by saying that she wouldn’t be politically correct and not answer the question, but after stumbling around for a few minutes she wisely reversed herself on that claim. “I guess I will be politically correct,” she laughed as she begged off the question intelligently not wanting to say that any particular other Republican was a dud in the personality department!

In any case, Sarah Palin was fun to listen to. I can’t say that Palin is a powerful speaker in the traditional oratorical way, but she is quite effective in her own way, a way that appeals to so many people. I was happy to have been there to see the Palin juggernaut rolling across the country. I mean, let’s put it this way, can you name any other politician that people would pay $55 or more to see talk for an hour or so?

Some of the other bloggers in attendance was Ed Morrissey of HotAir.com, Jonathan Garthwaite of Townhall.com, Tom Mannis of Chicago News Bench, along with myself (I didn’t see him but I think Alex Keown was also going to attend). 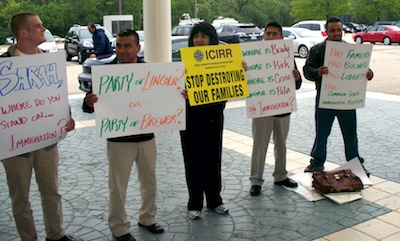 Finally, I’ll mention the very, very few protestors that came out to whine about the illegal immigrant issue. There was about 7 or 8 of them all holding their little signs. Naturally, many folks passing by scoffed at them and yelled to them, “what part of ILLEGAL don’t you understand?” These lawbreaker supporters quietly stood with their signs, though, so kudos to them for not being disruptive, La Raza-type creeps.

I have to say that I am surprised there weren’t more protestors out there. The police were not in any way stopping anyone from protesting as far as I could tell, so it wasn’t because of the man being oppressive! It’s just that no others showed up. I guess they were too busy?

So, that is my experience at “A Night With Sarah Palin” at the Rosemont Theater in the Chicagoland area. I am glad I went and I have to thank WIND AM 560 for the tickets as they made it possible for me to attend the Palin event.

Here is a video of the night posted by CStevenTucker.