Attempted Times Square Bombing Shows We Are Not Safe 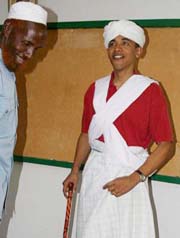 I won’t go much into the failed car bomb that could have killed hundreds in times Square, New York last night. I have no new insight into the incident itself but it is obviously the work of al Qaeda-like terrorists.

But what this does show is that we are still not safe. It shows that Obama’s turning terrorism into a police action has not deterred them from attempting to kill Americans en mass. It shows that Obama’s kinder, gentler non-war on terror has not made our enemies suddenly love us like he and US Attny. General Eric Holder seemed to think it was going to do.

Despite Obama’s attempt to schmooze them, radical Islamists are still the enemy of civilization.

If this bomb would have gone off, Obama would hold some measure of responsibility for it. Lucky for him that these particular terrorists weren’t as successful as the London bombers of 2007.