Southside Mayor Kicks Out Republican Candidate from Event for Being... Republican?

Looks like the good mayor of University Park hates the American system so much that he refuses to allow Republican candidates to attend events in his town even when they are invited by the event hosts. I wasn’t aware that a mere mayor had such dictatorial powers in the United States of America, but apparently Mayor Alvin McCowan thinks he does.

McCowen, a heavy contributor to 2nd District Congressman Jesse Jackson Jr. (D, Chicago), was incensed that Reverend Isaac Hayes attended a networking-styled event in “his” town recently and threw a childish hissy fit while demanding that candidate Hayes be thrown out of the venue. Hayes is the Republican facing Congressman Jackson in the upcoming 2010 elections.

Candidate Hayes just released a press release on the incident: 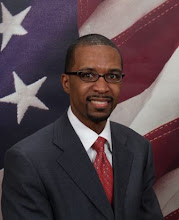 After Hayes spent approximately one hour interacting with other attendees, the Village Manager David Sevier approached Hayes’ Campaign Coordinator, George Pearson. According to Pearson, the Village Manager communicated “he was concerned about our being present at this function.” Following this conversation, Mr. Sevier angrily walked away and began to frantically make phone calls to unknown persons. Moments later, Mayor Alvin McCowan approached Mr. Hayes and abruptly asked him to “leave the premises immediately!” After putting his hand in Mr. Hayes’ face, the Mayor fiercely walked away to find the event’s host, Ms. Day. Having been brought to tears by the Mayor for allowing a “Republican” to sponsor a table, Day began clearing the table of all campaign materials.

“I guess this Mayor doesn’t believe his community has a right to decide for themselves, considering Rainbow Push’s material was placed in full sight and not taken down,” said Pearson. “If Jesse Jackson Jr. had a sponsored table here tonight it would be business as usual.”

The campaign’s white staff members present believes the Mayor’s discrimination was targeted toward them. Hayes said he definitely saw an alarming display of hate. “The way my staff and I were treated by the mayor is reminiscent of the 1950’s, with a ‘No Republicans Allowed’ sign,” said Hayes.

Mr. Pearson added, “Once our materials were removed from our originally assigned central location, we were then asked to move to the back of the room.” They were replaced by a tobacco vendor. “It’s apparent the Democratic officials believe alcohol and tobacco are more important than freedom of choice and speech.”

Mr. Hayes pointed out that on March 27th he attended a gala sponsored by the League of Women Voters Park Forest Area at the same facility without incident. According to him, the difference between then and now is “a group of thugs who are operating in Chicago-way bully politics. They may own the facility, but it belongs to the people.”

Hayes demands that Mayor McCowan “personally apologize to me and more importantly, my staff for the embarrassment and humiliation they experienced by having to remove all literature, take off campaign buttons and stop exchanging cards at a networking event, all as a room full of people looked on.”

Hayes also calls on Congressman Jesse Jackson Jr. to “step up to the plate and repudiate this discrimination and intolerance of American citizens. Otherwise, I will take his silence as an endorsement of treatment his father fought to end more than forty years ago.”

For the actual event invite, please go to: