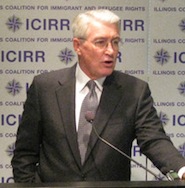 The state is abuzz with the announcement by former Illinois Governor Jim Edgar that he is now in favor of amnesty for illegal immigrants. At a press conference sponsored by the Illinois Coalition for Immigrant Rights, Edgar came out to chastise Republicans for fighting against illegal alien lawbreaking.

During the event, Edgar said that the GOP is making a big mistake to seem so antithetical toward immigrants and that immigrants have “brought a vitality to the Illinois economy.”

He went on for sometime about how wonderful immigrants are and that we need to work toward “comprehensive immigration reform.” It is easy to assume that Edgar wants total amnesty. But does he?

Sadly, Edgar was full of wonderful platitudes and kind words for illegals, but he was a far sight short of any actual policy suggestions. What did he mean to do with all these illegals? He just didn’t say.

Now, I am already on record agreeing with certain parts of the sentiment that Edgar expressed in his presser, but without specifics from the man, I can’t really say what the heck he’s actually supporting here. Take a look at the video.

Unfortunately, being as vague as he was, Edgar does more harm than good to whatever cause he is trying to support. Does Edgar want wide open borders, no state security, welfare to everyone in the world and amnesty for lawbreakers? One could easily claim that he does since he didn’t bother to say exactly what it is he’s proposing. This press conference did more damage than good to all concerned.

Those that stand against amnesty can denounce Edgar for his seeming desire to reward lawbreakers and extending the welfare state to them while amnesty supporters can point to him and claim he is for giving everything for free to illegals. But what was Edgar really saying?

I, for one, cannot tell from his rather empty words at this press conference. It is a shame, too, because we really do need to arrive at some logical solutions to this illegals problem.

Sadly, for all the pomp and circumstance of this press conference, it doesn’t look like Jim Edgar was any help at all… not to anyone.