Why is Judy Running? 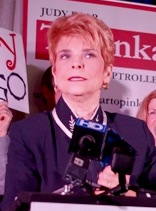 OK, the primary is over. The candidates are ready to start their race to the general election finish. Over the last week the GOP has firmed up its final slate and all the big office candidates met for a unity video and have gone out on the stump together a few times to rally and unify the Illinois GOP… all except Judy Baar-Topinka, ostensibly our GOP candidate for Comptroller.

Judy has not shown up to any of the unity meetings and was not in the unity video that the Illinois GOP was shopping around. She has been mysteriously absent from all of the campaigning thus far.

The only time I saw her was at the Cook County Republican convention back in September of 2009. There she was stumping along like the nearly 70-year-old woman she is, looking somewhat frail and put-upon.

It all makes me wonder why the heck she ran in the first place? Does she really want this job or is it just another way to triple or quadruple dip into the Illinois pension system? She already makes more on pensions than she ever did actually working at anything.