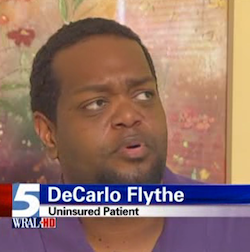 WRAL TV of Durham, N.C. has a story today that exemplifies how Democrats win votes in a most un-American way. In the words of one North Carolina resident and Democrat voter, Democrats are “like Christmas” because with Democrats in office no one has to pay any of their bills.

WRAL had a news story on local reactions to the signing of Obamacare and the report featured video of resident DeCarlo Flythe of Durham, N. C. who was “overjoyed” that Obamacare is here.

According to the report, Flythe has a job but doesn’t think he has to pay for his healthcare and he imagines that Obamacare will give it to him for the cost of a co-pay. Co-pays are doctor visit fees in many insurance policies that are typically less then $100 a visit. But co-pays are not all there is to paying for healthcare because the premiums paid to the policies are what is used to cover other aspects of the service to the patient.

Still Flythe thinks he’ll not ever have to pay for his healthcare again because of Obamacare. He imagines that a “co-pay” is all he’ll ever have to pay and all the rest is free. Obama gave him a “Christmas present,” don’t you know?

And this, folks, is how Democrats convince people to vote for them. They pretend to offer everything for free and all you have to do is vote for them. This, of course, is the most thoroughly un-American attitude that has been introduced into our American polity by Democrats starting with FDR (our second most socialist president after Obama).

This votes-for-freebies attitude destroys the American character of rugged individualism, freedom, and self-reliance. Further more it is unsustainable. After all, nothing is really free and the burden of the freebies that Democrats give away end up on the heads of people with jobs, the middle class and the business community.

Once again, Democrats prove to be entirely anti-American and a danger to our nation.