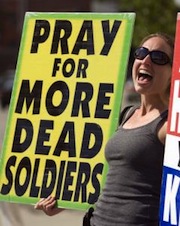 The creeps at the Westboro Abomination are at it again, this time finding a compliant judge to force the father of a fallen Marine to pay their further court costs from a recent case.

On March 6, 2006 Marine Lance Corporal Matthew Snyder of Finksburg, Maryland lost his life in Al Anbar province, Iraq in service to our country. He was 20 years old.

The creeps of the Westboro “church” showed up at this young hero’s funeral and harassed the bereaving family as they laid him to rest. As a result, the family sued the creeps.

In yet another indignity to the bereaved, the Marine’s family has been ordered by the Fourth Circuit Court of Appeals to pay the “church” $16,510 to fund their appeal process.

The Marine’s father Albert is struggling under this unfair debt.

Donate to help this family pay this idiotic court-forced fee and show these creeps in the so-called Westboro church that Americans stick by their troops.