We Hold These Truths: Meet the Real Face of Black Chicago, William Taplin

Full Disclosure:  I respect William.  In an old-school, southern boy twice-removed sort of way, he reminds me a lot of my dad.  While I initially hesitated in interviewing two Black men back-to-back, I thought that William’s perspective was both timely and needed.  As the nation continues to try to figure out what to do with the skeletons that keep jumping out of our Antebellum-clad closets, most discussions inevitably come back to the question of “What shall we do about the Black folks?”  For that reason, no other group is pontificated over more than urban Blacks, no group is more stereotyped than the urban Black male and…let’s be honest, NO ONE is feared more than mythological Young Black Male from Chicago.

Visions of sagging pants, super long white t-shirts, fresh Air Jordans and tilted colored baseball caps are usually the first images that come to mind.   Add machine guns, sunglasses, and amazingly well-tailored plaid shirts to the mix if you have ever seen a Drill Music video. 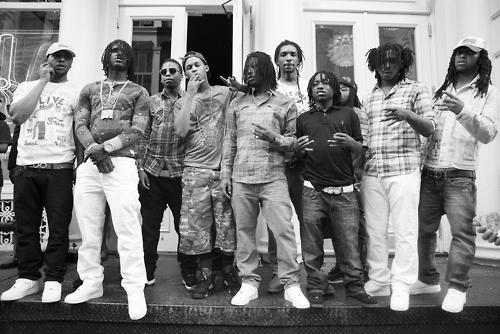 These images, often generalized as what typifies Black life in Chicago, are not the norm.

These images, and the culture of violence that goes along with them, represent an extremely small subsect of Chicago’s Black population.

When I think of young Black boys from Chicago, I think of the men who I know they can become.  Guys like William Taplin.  Photographers like Kahlil Williams and Stradford Stone.  Public servants like Brian Sleet.   Comedians like Clark Jones and Dave Helem.  Writers like Aaron Coats and George Davis.  Guys who are wickedly smart.   Deeply connected to their community.  Mildly cocky.  Sports fanatics.   Hip hop aficionados.  Guys who will make fun of you in jest, then buy you a beer afterwards if you take it personally.  Hard workers.   Believers that things can, and will, get better.

On Black Crime and White Violence…

Kay:  People within the Black community say we should be more upset at Blacks killing Blacks than random hate crimes?  Do you feel that that is a fair statement?

William:  I’m always confused by this kind of thing.  Why are they mutually exclusive?  Both issues are micro-level results of a macro-level problem…systemic-institutional racism.  I see no problem with caring about both. And how random can this terrorism be if it’s the same shit all of my ancestors dealt with?  No, there is nothing random about it.  It is as much a part of American culture as apple pie and bad 80’s fashion.

On Rap and Changing Lives…

Kay:  In a rap off, who would you expect to spit the dopest lines?   Kanye, Common, Lupe or Barack Obama?

William:  At current skill-level, Lupe.  But, Barack isn’t far off.  If you listen to his speeches, he already has a command of cadence and flow.  It goes without saying that he has the knowledge-base to drop some jewels in verse form.  What he is lacking is a mastery of the craft of creating intricate verses in rhyme form…which is what separates a rapper from an emcee.

Kay:  Okay, if Bill Gates gave you  a billion dollars to invest in one thing to stop the crime in Chicago, where would you invest it?

William:   In a combination apprenticeship/infrastructure/engineering/multimedia collective co-op thingie, that would also have a LARGE set-aside for community development lending.  I firmly believe that jobs and access to resources would go a long way in helping minority communities.

Kay:  Are you [still] hopeful?

William:  Have I given up? No.  Have my expectations been tempered substantially over the years? Absolutely.  The relationship between those in power and those without has been pretty consistent throughout history…power usually wins out, while the powerless make marginal gains and are slightly better off than they were before. This isn’t absolute, but the trend points in that direction.

On This Generation’s Piece de Resistance…

Kay:  MLK called for peaceful resistance, Malcom X called for righteous indignation.  What should this generation call for?

William: I’m not sure there is anything that we can say or do differently that hasn’t been done before.  Black folks have always been smart enough to voice displeasure with their lot in America…through peaceful demonstration, academic research, violent protest, etc.  HOW we voice that isn’t the problem…it’s the deaf ears of dominant culture that is the problem.

On Fear and Hate and America…

Kay:  Do you hate white people?

William:  Nah, heck no. I love people….but I hate the shit that people can do to each other, regardless of color. We humans are capable of some heinous actions/systems, myself included. I can have strong dislike or hate for an individual person based on their actions, but it’s really difficult for me to “hate” an entire “race” of folks.  Nothing about that feels right.

Kay:  Do you hate the police?

William:  Nope, I do not hate police officers…and it always bugs me to hear someone say as much. I’ll tell you this…despite the cops’ role in the criminal justice system and how it relates to me as a black man in America, you can bet your last dollar that I would NOT hesitate to call the police if my home was broken into, or I was assaulted, or someone close to me was kidnapped, etc.  If you REALLY wanna dig into the weeds of this thing, cops are simply instruments of the social and political structures under which they serve.  They enforce the status quo, but they don’t establish the parameters under which things happen.  Power writes the rules…cops just enforce them, either by law or by custom.

Kay:  Do you believe that “they” hate you?

William:  Some probably do…but that’s their burden to bear.  I can’t be as concerned with that. You can hate me, but the LAW should not be a respecter of personal feelings, which is what this is all about…equal protection under the law. Legality “in practice” can’t be a slave to personal opinions, and for too long in America, the opposite has been the case.

Kay:   If you have something else to say about race in America, go for it….

William:    [James Baldwin said,] “To be black and conscious in America is to be in a constant state of rage.”   For myself, what fuels that “rage” is not the blatant racism, but the implicit fact that privilege is just as prevalent within “progressive” corridors of power.  While those aren’t nearly as violently racist, they do uphold the status quo.  Concessions and incremental progress [is] doled out as proof that “the system works”.  Admittedly, we are better off than we were before, but it still feels way too slow.  No matter what gains we make, it cannot happen without the “permission” of those in the privileged class.  And we actually NEED them, because racism isn’t a problem that the oppressed can fix.  It isn’t a system we created.  The social, political, and economic designation of “blackness” doesn’t exist without the power of “whiteness” in America.

On Our City, Chicago…

Kay:  Why do you continue to live on the southside of Chicago?

William:  A change may be coming, though it won’t be because of the “violence”.  More just because I’ve never lived anywhere else…EVER.  Though, I’m certain I’d return home sooner rather than later.  I love this place too much.

William Taplin works in Development and Communications for an organization which works with faith-based institutions in tackling issues pertaining to poverty and racism.  Follow him on Twitter @wtaplin.

“We Hold These Truths,” will run weekly on Tuesdays.  To read previous posts in the series, check here.