ARLINGTON HEIGHTS — On a picture-perfect Autumn afternoon, Arlington International ended its yearly meet with a pair of stakes.  Both stakes were on the turf, contested at a mile, and for three-and-up types.  Females went first in the Melanie Frances Stakes while open company followed a half-hour later in the Teleprompter.

Earlier in the day, INNOVATIVE IDEA scratched from the $50,000 Melanie Frances Stakes to leave a field of seven to travel a mile on the Arlington turf course.  Rated “firm”, it saw NOTTE d’ ORO be made the 7/5 favorite among the wagering public with EDEN PRAIRIE taking money at 5/2 to start her fall-winter campaign.  The bell rang and PUNTSVILLE went to the front, with PIRATES TROVE and EDEN PRAIRIE in close attendance as the three were on the lead for most of the early stage of the races.  The three set up a contested pace of :23.50 for the opening quarter and :48.48 for the opening half mile.  The lead had passed to PIRATES TROVE on the turn, but the three found themselves wilted from their battle, as closers began to rally.  On the inside was NOTTE d’ ORO, while BE PLAYFUL and and DISTORTED TYPE began to rally on the outside. 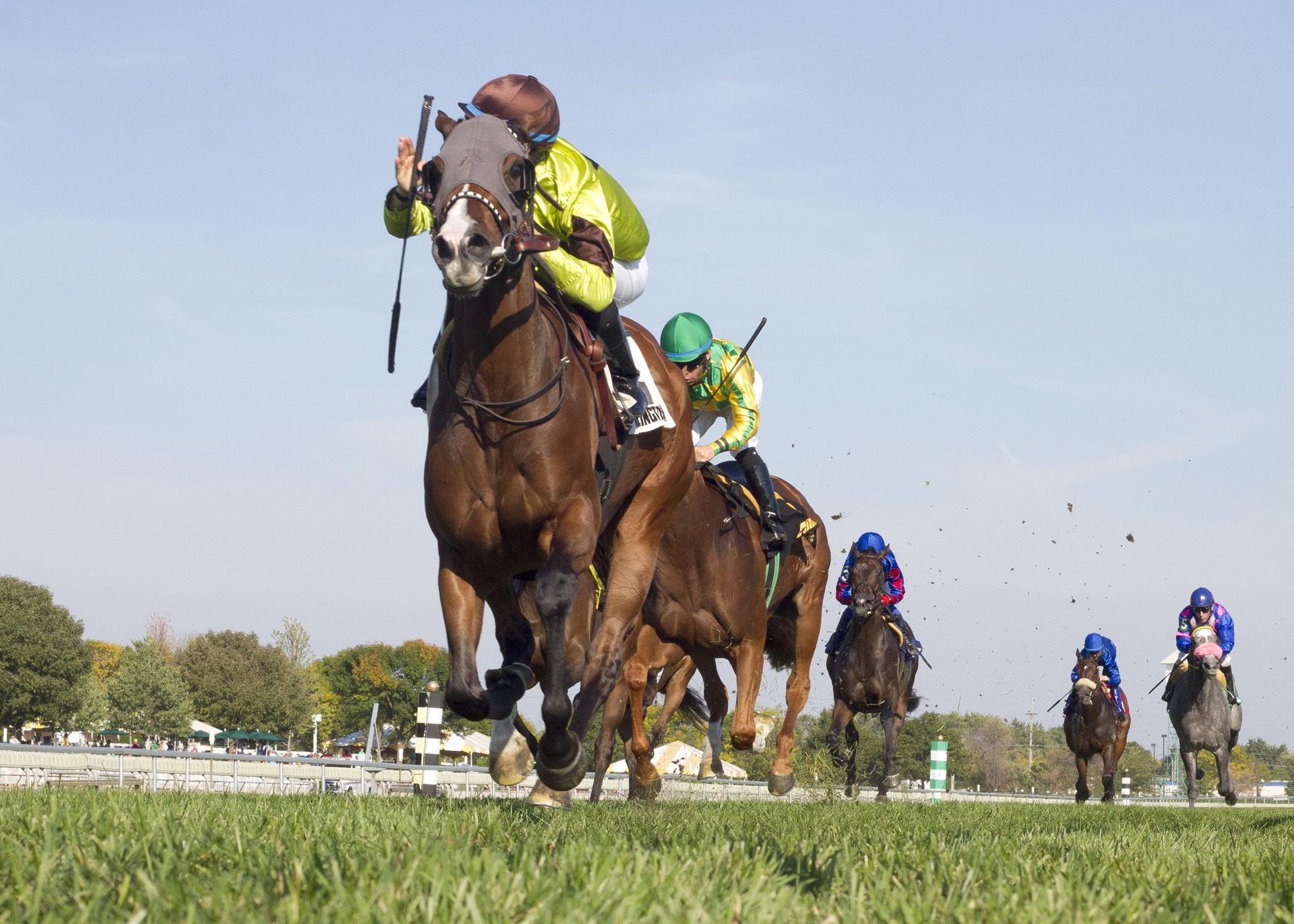 NOTTE d’ ORO (brown cap) gets her first stakes win and Jose Valdivia’s first of the Arlington meet in the Melanie Frances.

In the stretch, NOTTE d’ ORO grabbed the lead and would split rivals after demonstrating a closing kick.  She’d pull away to a victory by two and a half lengths in the Melanie Frances Stakes.  Jose Valdivia, Jr – the meet’s leading rider – was aboard for trainer Michael Stidham on the four-year filly that’s a half to Grade Two winner Red Rifle.  She’s by Medagalia d’ Oro out of Gulch filly May Night.  Her win in the Melanie Frances rewarded backers to the tune of $4.80 to win.

Winning rider Jose Valdivia, Jr earned his first stakes win of the Arlington meet on closing day, describing it as a “great feeling” as he had won at Arlington before with Bobby Frankel trainee Heat Haze in the 2003 G1 Beverly D.  Valdivia was aboard NOTTE d’ ORO for the first time and was relayed riding instructions that he relayed happily post-race.

“Try to give her a good trip.  Try to get her to settle.  She added the blinkers last time, and he thought she was just a little bit too keen.  He said, as soon as you have her in a comfortable position where she settles, she’ll give you a big kick.  She was pulling a little bit the first quarter mile.  After that, when the pace quickened just a tad, she settled really nice for me.  After that, I couldn’t ask for a better trip.  I knew she would be there for me when I asked her.  I was loaded down the lane.”

Winning trainer Michael Stidham was aiming for graded black type with NOTTE d’ ORO, and shipped her (the half sister to Red Rifle, who was fourth in today’s G1 Joe Hirsch Turf Classic Invitational and won last year’s G2 Hawthorne Gold Cup) to Southern California for that purpose.  NOTTE d’ORO did earn some stakes placings at Fair Grounds and Canterbury but earned her first stakes in the Melanie Frances.  Stidham post-race indicated he will “take her to Keeneland and find a spot for her.”, as a pinpointed race was not given at publish time.

Earlier in the afternoon, Kentucky-based trainer Brendan Walsh won the Grade III Jefferson Cup Stakes at Churchill Downs with Saham.  Less than an hour later, and 333 miles northwest, his charge KEY TO POWER walked into the starting gate at Arlington for the Teleprompter Stakes.  Saham and KEY TO POWER were the only two horses he had entered all day.

The Teleprompter originally drew a field of eleven, but five never ended up seeing the starter.  MIDNIGHT CELLO scratched to run in the Ack Ack (GIII) instead, in which he finished fourth.  SPARK KIT opted for allowance company at Arlington; he finished second in the easier spot.  PABLO DEL MONTE and STORMY PACIFIC were both trainer scratches.  SUPER SOLDIER, who flipped in the paddock before the Teleprompter, scratched at the gate after rider Julio Felix noticed he was warming up stiffly on his right lead.

That left a field of six, with AZTEC BRAVE the favourite throughout the betting.  Joe Sharp’s last-out winner of the listed West Virginia Speaker’s Cup opened at 4/5, and went off at 1.1/1.  YANKEE DEALER, a winner in an allowance at Saratoga last out, was the second choice throughout the betting; he went off at 3/1.  KEY TO POWER and FLASHLIGHT traded as third choice among the bettors, with FLASHLIGHT going off slightly more favoured at 9/2, with KEY TO POWER 5/1.

CREWMAN, the longest shot on the board at 11/1, sent to the lead early.  AZTEC BRAVE sat about a length off of him through the clubhouse turn, but made his move turning into the backstretch.  He took the lead with four and a half furlongs to go, and edged ahead to take a commanding lead.  He opened up three lengths going into the far turn, and maintained a daylight lead turning for home.  CREWMAN faded out of it, but the rest of the field was beginning to make their runs.  FLASHLIGHT and KEY TO POWER were closest up.  Passing the furlong pole, KEY TO POWER was farthest outside — but had the best stride of all.  He passed FLASHLIGHT easily, he passed AZTEC BRAVE easily, and passed the wire three quarters of a length in front.  FLASHLIGHT closed well enough to capture second by a neck over AZTEC BRAVE.  PEEJ, near the back of the pack for much of it, kicked on to round out the superfecta, beaten only a length and three quarters for everything. 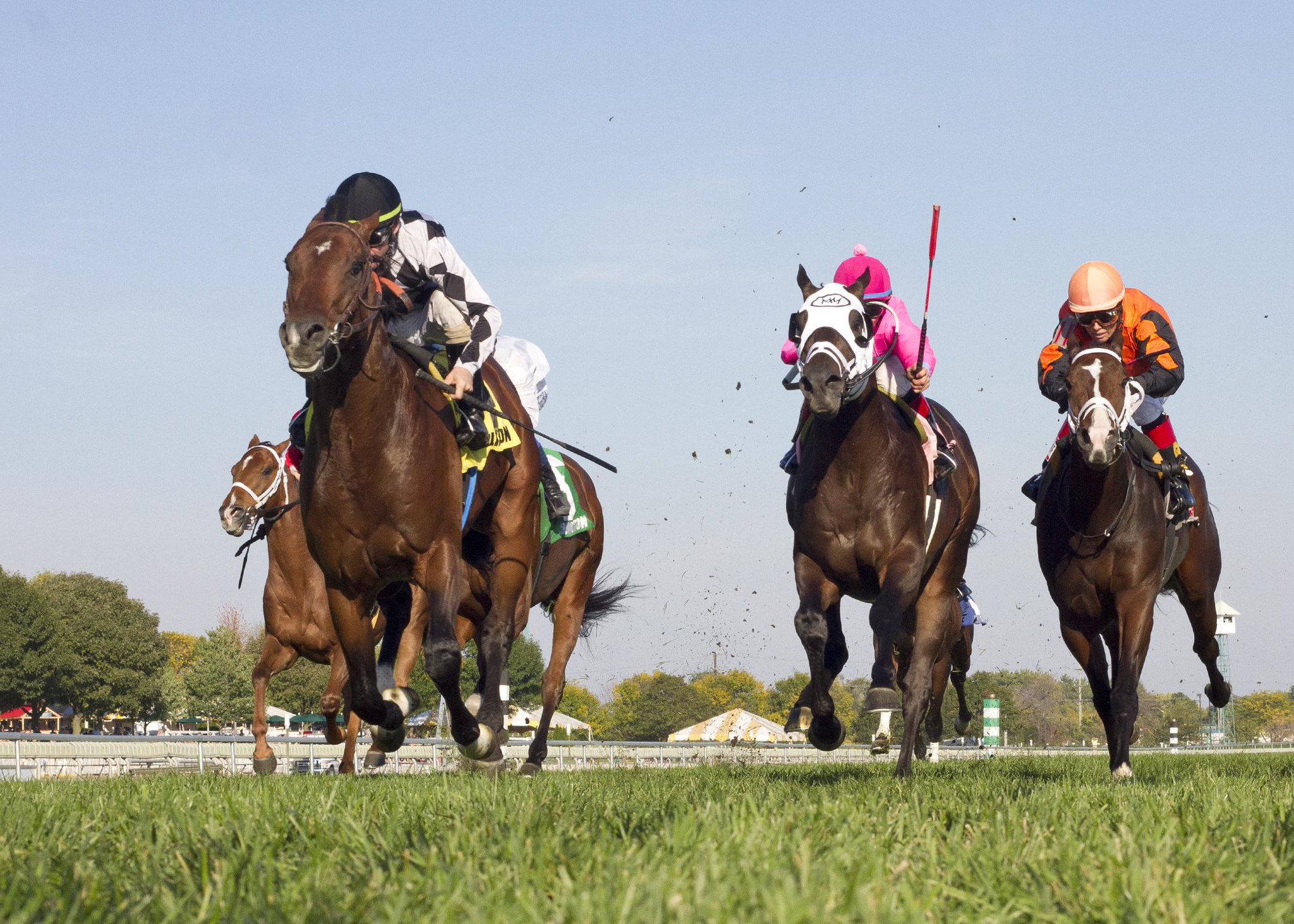 KEY TO POWER is a six-year-old horse, bred in Kentucky by Pam and Martin Wygod, by A. P. Indy out of the Rahy mare Exotic Wood.  He is trained by Kentucky-based Brendan P. Walsh, and owned by Premier Stables Unlimited.  They claimed KEY TO POWER for $35,000 in February of this year, from Patricia’s Hope LLC and Michael Tomlinson, and have run him in protected company ever since.  In his eight starts for Walsh, he has won four times, including twice in stakes company.  KEY TO POWER has now won 11 times in 34 starts, with those wins coming at seven different tracks.  That ability to travel well served him in good stead today, as he just travelled to Arlington yesterday with assistant trainer Dorie Smith, and had never been to the course before.  He was ridden to victory today by Chris Emigh.

The trip worked out nicely for Emigh.  “I saved ground,” he noted, “and I had a comfortable spot.  I had an outside trip, switched to the right lead.”  Even though this is the first time Emigh has ridden KEY TO POWER for Walsh, he had confidence in his mount. “He’s easy, push-button.  He takes his time and he knows where the wire is.”

According to trainer Brendan Walsh,  KEY TO POWER’s progression off the claim has surpassed expectations.  “It was actually Joe Strazzanti [of Premier Stables Unlimited], the guy that owns him, it was all his suggestion.  He wanted to claim the horse.  He’s the one who thought he’d turn into a nice horse.  But, I don’t think we ever thought he’d win two stakes like he has.  Dorie Smith, Walsh’s assistant, agreed with that assessment.  “We thought we could improve him, and we had hoped we could bring him on.  He has just come on more than we could have hoped.”

The placement of KEY TO POWER in the Telemprompter was a matter of timing.  Said Smith, “Coming out of the race at Ellis, it turned out to be a perfect time difference between the two races.  He came out of the last race super, so we were ready to run him back pretty quickly.”  With respect to KEY TO POWER’s trip, Walsh noted,  “I was a little worried at the three-eighths pole, he was a little far back.  But, they were going plenty fast.  He loves to run at a fast pace.

KEY TO POWER’s team was happy about their two-state, two-stakes double today.  “It’s a huge day,” remarked Smith.  “These are two of our favourite horses in the barn.  They’re both good boys.”

You can take “Picks & Ponderings” with you anytime, anywhere. You can get Twitter updates @picksponderings for on-scene reports from Arlington International Racecourse. And you can get “Picks and Ponderings” in your e-mail by typing your email address in the box and clicking “Create Subscription.” It’s a FREE service, and you’ll never get any unwanted spam.