Blogapalooz-Hour: Laughing at the Darkness 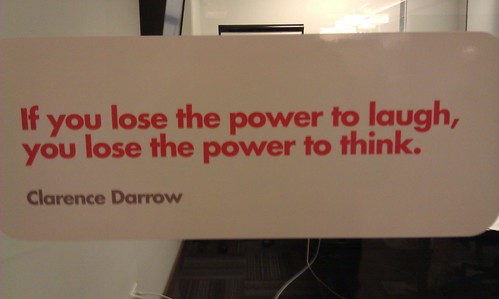 Since I have spent the last four days writing up my notes from Cyber Security Chicago, I missed our monthly call for Blogapalooz-hour, where we have one hour to write on a specific topic. This month’s challenge is….

My sense of humor is….dark. Very dark and absurd.

Naming everything that’s made me laugh could fill several blog posts….from Blazing Saddles (which I conned my father into taking me to see when I was ten) to Monty Python, from the Kids in the Hall (who I actually saw tape their show…and blogged about. Twice.) to the Smothers Brothers and Steve Martin (my friend Bob and I listened to Martin’s Wild & Crazy Guy album repeatedly) and of course, the Marx Brothers (because let’s face it, everyone needs a bit of anarchy and attitude in their comedy)

Comedy helped me to handle life’s various difficulties. My childhood was….well, it was rough. (I was the stereotypical “fat kid”, and of course, I acted out every obnoxious stereotype). I always loved anarchic, smart-ass humor (earning the nickname “Groucho” one year at summer camp) and my jokes often reflected that. When I entered the chemical dependency and (later) nonprofit fields as a professional career, I discovered that a dark sense of humor helped me deal with tough situations. (When you’re working with homeless clients in St. Louis, you need to have an edge).

That time my blog review made the door of Second City. Seriously.

It also helped that humor also helped me become more creative. For a while, I was partners in running a Comedy Community with my friend Mark Kilmer. When he passed away, well…I found the irony in missing Mark’s passing rather absurd. In the aftermath of a painful breakup, I was able to find solace writing for a Python-themed website. And the results are….the results. Even my personal blog (which is liberally quoted in this post) showed a willingness to see the lighter side of things…

…which is good, because my mood can get dark very quickly. My humor has actually moved into a more positive direction. Not so much in terms of vulgarity or nastiness (so it’s not like I’m more Red Skelton than Andrew Dice Clay), but I no longer need to “one-up” people through wisecracking. It’s less the idea of “punching down” than “punching the right target” and gaining a sorely needed perspective. Watching Scott Thompson’s monologues as Buddy Cole in the Kids in the Hall helped me work through my own attitudes about the LGBTQIA community. The Smothers Brothers and Steve Martin allowed me to see how certain forms of art had their own “rules”…which I could tweak.

And Monty Python and the Marx Brothers….taught me that some institutions deserve to be brought down.

Having a strong sense of humor has helped me in recent times since I’m attempting to care for my ailing mother and maintain consistent freelance work. It’s never easy, and often stressful (with some discouraging me from working to stay at home full time and those who believe I’m getting a “free ride”), and often leads me to wonder if I’m contracting “compassion fatigue”. But having a sense of humor – and exercising it – helps me keep a well-needed sense of perspective (as well as, quite frequently, a grasp on sanity).

Most of my efforts tend to focus on Twitter and Facebook, because…well, I don’t get out much, so social media helps me fill in the gaps. At times, I have to find my life incredibly absurd: wanting to have a heart-to-heart with a friend, but we’re on completely different schedules; finding myself feeling like an adolescent even though those years are behind me…and I have to crack a grin. Not only because I see how absurd it is, but to stay in the darkness would truly be futile.

But as the graphic/quote from Next Door Chicago above states, when I lose the ability to laugh, I lose my ability to think and retain perspective. And right now….that’s something that is sorely needed in my life.

If you have questions or comments, please leave them below or join the conversation via our Facebook page. If you want to contact me privately, you can e-mail me via my personal website.

And as always, thanks for reading!