How A Chicago Guy Grew Up in St. Louis

Every month, Chicago Now Bloggers participate in “Blogapalooz-Hour”, where we all write about a particular topic in one hour’s time, and this month’s topic is “Write about the first time you felt like you were a grown-up.” What’s particularly ironic is that I felt like a grown-up….when I moved to St. Louis and lived there for seven years. Short story – after leaving grad school, moved to Oregon because I got engaged. Planned on settling down, work in the chemical dependency field…and then the relationship ended. After finding a job in St. Louis at the urging of one of my friends, I moved to St. Louis during a very hectic December, living there until I moved back to Chicago in March 2007 because of my mother’s health.

In short, I had always wanted to move someplace else and live on my own, mostly out of that urge to “explore the world” and move out of my parents’ house. As someone who wanted to work in chemical dependency (and with a strong urge for social justice), it seemed like a happy medium – far enough away from family to have space, but close enough to get there in a hurry. (I lived within 20 minutes of Lambert Airport, and it’s an hour flight from Chicago to St. Louis).

But when I lived in St. Louis, it was where I had to learn – was forced to learn – how to take care of myself without my parents’ help. Starting as the director of the Shelter Assessment Program for the Greater St Louis Treatment Network (which no longer exists), I found myself working for Salvation Army for a year under the same contract. Working in that field helped me work through some key issues and understand the idea that certain systems were inherently slanted and provided some individuals key advantages. It was a wake-up call to a greater social consciousness, and a more mature perspective on community – I couldn’t just sit and expect change to happen; I had to take an active role in being an agent of change. 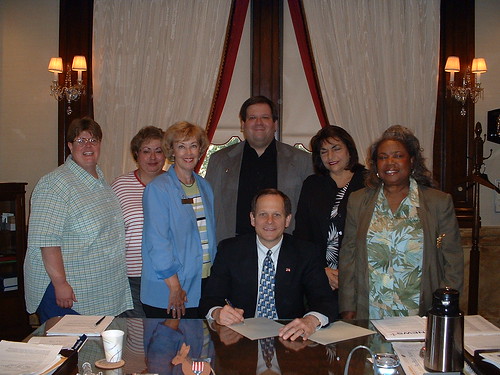 In time, however, I found myself wanting to do more policy and community work in chemical dependency and worked for the National Council on Alcoholism & Drug Abuse – St. Louis as a community organizer. (I was also, as I wrote in another post, their “tobacco guy” focusing on tobacco prevention and merchant training – see the picture on the right as Mayor Francis Slay signs legislation banning smoking in municipal buildings). In time, I even began expanding my activities – writing a white paper on malicious & absentee landlords and serving on the board of Metropolis St. Louis (which is now part of Revitalize St. Louis). I served on the initial “Young Professionals” board of Great Circle. Most importantly, I started blogging when I lived in St Louis with my personal blog. (And if you think Chicago nonprofits face challenges…try St. Louis)

But these activities had a slightly different feel than my youthful volunteering. In St. Louis, I wasn’t just bumming around – I was developing relationships and friendships that weren’t based on school or work. I was living in a swinging bachelor pad with my cat. In fact, visiting Chicago on holidays made me want to stay in St. Louis – partially out of family issues, but because I never really saw any appeal within Chicago for me.

Then, in August 2006, I had to make a fateful decision. Working on an EPA-funded program for another nonprofit, I was dealing with a very unpleasant boss. It’s easy to throw words like “gaslighting” and “bullying” around, but it was not a good experience. After being chastised for something which happened while my father was having surgery, I had decided to give up….and then, my mom called to let me know Dad had passed.

On the phone, I remember saying, “Mom, I know you want me to come back…but do you need me to move back?”

It was the easiest decision to make – I began looking for work in Chicago. My mother and aunt found me an apartment. After leaving the job in March 2007, my aunt flew into St. Louis, and she and I – and the cat – drove back to Chicago, where I’ve been ever since.

St. Louis, however, was a great training ground for becoming an advocate for social change. Like Chicago, St. Louis has a diverse collection of neighborhoods rife with possibility for civic engagement. It was at a time when I needed to stand on my own two feet….call it a protracted adolescence, if you will. I have to admit that I miss many of the people I knew – although I’ve visited St. Louis in the past, I haven’t made it back in several years. Some relationships are strong, and many people I miss…including the person who hired me, and who I later supervised. Several coworkers who were great allies and provided guidance. And people whom I really need to send a follow-up….because although I don’t miss living in St. Louis, I really miss the experience.

But my experience in St. Louis is a very formative time,\when many of my attitudes and beliefs were formalized and tested. Maybe I was raised in Chicago, but I definitely grew up in St. Louis.

Your thoughts? Please feel free to leave them in the comments below, or join the conversation via our Facebook page. You’re also more than welcome to reach out to me privately via this contact form.

And as always, thanks for reading!