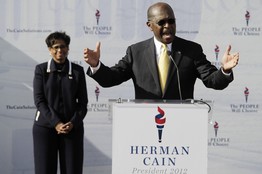 “As of today, with a lot of prayer and soul searching, I am suspending my presidential campaign,” Cain said at what was supposed to be new campaign headquarters in his hometown of Atlanta. “I am disappointed that it came to this point that we had to make this decision.”

Cain, who for a short time in October actually led many national and state public opinion polls, had offered voters a “bold”, comprehensive,  and yet practical vision for our Country, with its most novel and yet well researched idea, being his “9 9 9” tax plan.

Presumably, it is exactly this bold vision for America, which would ultimately be his undoing, for it compelled those who benefit from the “status quo”, such as single, middle to lower class females, to spearhead a campaign to defame Cain’s character. Cain’s repeated displays of expertise regarding a wide range of issues, particularly foreign policy matters, only heightened their sense of urgency.

Amazingly, these unassuming women who would self-servingly and dishonestly claim Cain had sexually harassed them, were aided, if not emboldened, by  a number of powerful and influential forces, including the “liberal media”, the Democratic Party, the DNC, MSNBC, Racists, the Post Office, Occupy Wall Street, Marijuana Smokers,  and homosexual illegal immigrants who are members of PETA.

Cain, who as many will remember once told the unemployed to blame themselves, recognized the character assassination attempt was wide in scope, and began to assign blame accordingly. Cain would ultimately defend himself the only way an innocent man could-by repeatedly going on the Sean Hannity Show to vaguely deny the accusations, while playing the “race card” .

For a while, aided by such respectable allies as Ann Coulter and Rush Limbaugh, Cain’s unorthodox and insulting defense devoid of facts or logic, was proving beneficial, for Cain remained at or near the top of many opinion polls.

Then came the grand conspiracy’s ace in the hole…the kill shot… Ginger White.

Ginger, a confirmed longtime friend of Cain’s, claimed that she and Herman had a sexual relationship which lasted for over a decade. White, aided possibly by her liberal phone provider, supplied cell phone records to substantiate her seemingly outlandish, implausible claims. Unlike with prior allegations, Cain’s lawyer did not issue a straight denial, but rather a defense that said the media should not inquire about his “private sexual life.”

Unfortunately for Cain, not to mention all those who care about the United States, this solid, inarguable, evidence based defense, would not be enough to save him and his campaign (and in fact, our Country).

All hope is not lost however; Cain also announced on Saturday that while “Plan A” may have fallen victim to the disingenuous powers that be, he has a backup plan-which he cleverly has labeled “Plan B”.

“Before you get discouraged, today I want to describe Plan B. … I am not going away. I will continue to be a voice for the people.”

A bold vision called for an even bolder Plan B, and Herman did not disappoint.

Plan B: The World Wide Web