It’s time once more for the biggest sporting event of the year involving baby dogs. The Puppy Bowl is here again and, if my wife is a proper barometer, America couldn’t be more excited, and also apparently wants me to stop leaving my dirty dishes in the sink. But whether you’re a diehard frolicking fan or just in it for the kitty halftime show, you don’t want to show up at your Puppy Bowl party tonight and make a fool of yourself by not knowing what’s going on. You’re trying to impress people here. So let’s go over a few of the main talking points to save those uninitiated few among us a lot of embarrassment. 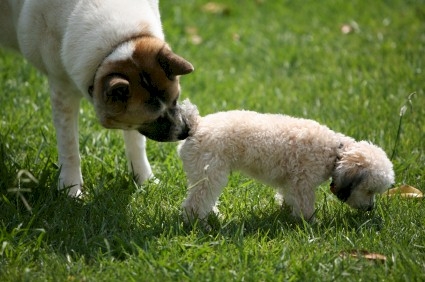 Some say his best days are behind him. But a new brand of kibble has reinvigorated him, helped him slim down and improved his digestive health. Don’t think the other pups haven’t noticed. He’s rightfully been receiving a lot of extra attention lately, especially from the bitches. Look for that to continue today. Who will win the squeaky toy time of possession battle?

The answer will hinge on who is able to take possession immediately, as they’ll likely not be willing to let it go without a fight, or at least not without seeing a squirrel.

Will Buddy be able to avoid filling up on feces prior to kickoff?

It’s well documented that he’s struggled with doo-doo eating for years, but his ability to control the problem in the lead up to today has been one of the truly unexpected surprises of the week. His breath has never smelled less of poo. It’s not as though the temptation hasn’t been there; it always is. And there will be no shortage of enticements out there today—on the field, in the locker rooms, in the water bowls. But he insists that things are different now and he’s not going to risk it all just to get quick fix. After all, the Puppy Bowl is what these dogs dream about from the time they’re driven to the TV studio in which it takes place and plonked on the field to the time they’re taken off the field and driven home, at which point they go back to dreaming about eating their owners.

Will Ernie catch his tail?

He’s been training relentlessly, only stopping to eat and urinate on the rug when the vacuum cleaner is turned on. The practice time has paid off, as he’s been getting closer every day. Today could be the day he puts it all together. Or it could be the day that he gets so dizzy from the chase that he vomits, licks it up and then takes a nap.

She’s tried everything. Training at home, obedience school, but nothing seems to…no! Get down, Tammy! Bad dog! Bad girl! You know you’re not allowed up there. Down girl! Down! Now, get!