Minnesota: Jug, Axe and Pig Come in No.2

At number two, the difficulty of having to decide what rivalries should be included in this list, and which ones I should leave behind arose. I came to the realization that a certain team was not yet listed, but had great rivalries that could not be ignored or characterized “better” than another. For that reason, Minnesota and their rivalries between Michigan, Wisconsin, and Iowa for the Little Brown Jug, Paul Bunyan’s Axe, and Floyd of Rosendale respectively are ranked no. 2 on my list.

Playing for the oldest traveling trophy in college football, The Little Brown Jug dates back to 1903 when legendary Michigan Coach Fielding Yost left his 30-cent, five-gallon jug on Michigan’s sideline after a game at Minnesota. Yost, wanting the Jug back, asked that it be returned. With Minnesota’s “finders keepers” attitude, the two teams met again in 1909 with the winner having the right to keep the trophy. 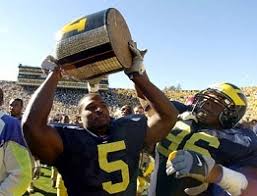 In the most-played rivalry in division 1-A football, Minnesota and Wisconsin have met on 120 occasions dating back to 1890. And since 1948 they have battled for one of, if not the most recognizable trophy in college football, the Paul Bunyan Axe.  With one side painted red and white and the other maroon and gold, the score of each game is added to the shaft of the over-six-feet-tall trophy.

As the final seconds tick away in the annual matchup, the winning team will rush over to retain or “steal” the trophy and then go over to an end zone and “chop” down the goalpost. 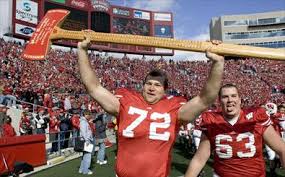 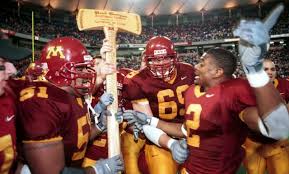 Dating back to 1935 when Minnesota and Iowa played for a live pig…yes, you heard me right; the rivalry has taken on a life of its own as they battle for Floyd of Rosendale.

Following a bet between Governors Floyd Olsen and Clyde Herring of Minnesota and Iowa respectively, “a prize hog” from Iowa’s Rosendale Farms was presented to Minnesota’s Floyd Olsen in the Governor’s office after a victory over Iowa. The pig was named Floyd, after the Minnesota Governor.

Since the schools could not keep betting live animals on the game, they had the Floyd of Rosendale Trophy made in likeness of the original pig. 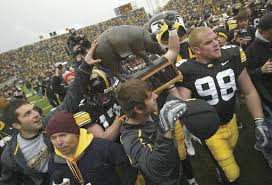 Throughout their rivalries with these three schools, Minnesota leads the all-time series records over both Iowa ( 61-42-2) and Wisconsin (59-54-8). Michigan leads the series with a 67-22-3 record over the Gophers.

These rivalries are not just great for the schools involved, but for the conference as well. And regardless of the record of either school before a game, it is always a big deal!