Okay, where are Starsky & Hutch when you need them?  Watching Mayor Rahm Emanuel’s press conference, on the recent crimes being committed in the city of Chicago, makes me long for even pretend justice.  It was classic Rahm — cryptic, pandering and full of baloney!!  If it weren’t so pathetic, it would  be humorous to watch him brusquely dismiss questions about the umpteenth attack  by ignorant flash mobs and teen gangs.

This may be the beginning of a long, hot summer in the city.

Although, my heart and entire being goes out to the Mayor, when it comes to dealing with the dreadful Teacher’s Union President.  On this issue, he loses my vote.  He sorta gives us that incredulous look like:  “What are all you people talking about?  There were no problems on Michigan Avenue last Saturday night.” 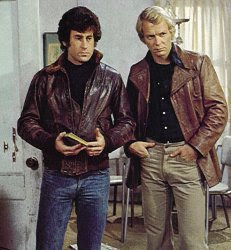 I am trying to find the right word to describe the individuals involved in these so-called “wildings,” which are taking place too many times in our beautiful city.  A friend called them “Hoodlums,” and added another adjective to stress his disgust.

Oh, I’ve got one:  THUGS!  Oops, I know I’m not supposed to use that bad word to describe the little darlings.  The very Reverend Jackson will tell me that is “racist.”  But, let’s just call it what it is.  A group of thugs, looking to intimidate people who are just trying to enjoy their time on Michigan Avenue or walk safely down the street to go to the grocery store.

So, why are we so afraid to name a group of unruly offenders “thugs” or a “mob?”   I think those words aptly describes violent groups, who think it is cute to push, shove and assault citizens, tourists and police officers.

Rest-assured, though, Rahm wanted all of us to know that tourism and hotel occupancy numbers are up.  Whew!   That’s a relief!

It seems to me that Mayor Emanuel responds to our concerns for safety in our neighborhood with a tinge of disdain.  I mean, the Gold Coast is not exactly “gang territory.”  I haven’t heard any gun shots lately.  So, what’s the big deal, right?

I guess we are just a bunch of pesky, hard-working, tax-paying, law-abiding folks.  So, can’t we just clam up?  Mayor Emanuel and the Chicago Convention Bureau have it all under control.

Like the savvy guy he is, Police Superintendent Garry McCarthy, played the loyal soldier at the same press conference.   He finds it necessary to remind us that people have “just as much a right to come down to Michigan Avenue…..blah, blah, blah.”   He says that a lot, and I actually like Garry a lot.  Well, nobody said they didn’t have a right to come downtown.  But, let’s face the truth.  Two hundred teenagers aren’t heading downtown to sing spirituals on Chicago Avenue.

I can’t believe that the Mayor and Superintendent are unaware that there are actual residents who live in their homes near Michigan Avenue, most of whom have bigger concerns than picking up a new Samantha doll at American Girl on Saturday.

Alderman Brendan Reilly has always been responsive to his constituents.  Suffice to say, he gets it!   He knows the story and the score.  “Forthright” will never be Rahm Emanuel’s middle name.   “Shifty” is more like it.   I am not buying his company line.   Behind closed doors, you can bet that he isn’t buying his own spiel either!

Alderman Bob Fioretti suggested that Garry and Rahm are in “denial.”  Yes, just like those middle-aged women shopping for jeans at Forever 21 –

They are definitely in DENIAL!!

Garry says these mobs aren’t “organized.”  You mean, they didn’t formally apply for a permit to steal an iphone?  Sure, and not organized like my Alfa closet, either.  But, Garry McCarthy is a very smart man and did not just fall off the turnip truck.   He knows that the thugs are organized enough with just one social media Tweet going out to hundreds of fellow low-lifes, saying:  Be at this corner, at this time.

It doesn’t take a genius to figure out that  hundreds of kids, coming on and off the Red Line subway — apparently, in between menacing riders — are NOT heading up to the top of the Hancock to watch the sunset.

The Superintendent also wants us to take comfort in knowing that “no assaults, robberies or property damage” were reported from the melee on Michigan Avenue.  “Reported?”  You mean that the tourist, visiting from Germany, didn’t go to the police station to fill out the paperwork on being shoved and hit in the back of her head?

Last I heard, local business owners are very concerned and just waiting for the next time when damage will be done.  Don’t they deserve better than this?  Is the Mayor waiting for the next assault, before he heeds Alderman Reilly’s advice to put a formal plan in place?

Barney Fife could even understand this one.  We need to stop criminal behavior and show more compassion to real victims.  Let’s not just try to put a good spin on whether the Marriott Hotel is booked next week.  We live here in our neighborhoods and deserve more than lame responses and ad nauseum political correctness.

What ever happened to “Do the right thing?”