I have to admit that I didn’t know who Frank Thomas is. I don’t follow sports at all so I had to look this guy up to find out that he’s a former White Sox baseball player. I guess he was pretty good. Good enough to afford building a 41 room, 26,000 square foot mansion in Oakbrook in 1997 that he sold to a real estate developer in 2003 for $7.95 MM. According to the Chicago Tribune that’s still the highest price ever paid for a home in DuPage County.

13 years later – just two weeks ago – his former home at 3312 Midwest Rd, right behind Midwest Club, sold for the 3rd time, in a second foreclosure, for only $2.3 MM or only $92/SF. How it got to this point is a long, twisted, but colorful tale.

The real estate developer that bought the house in 2003 was Ronald Scarlato who went into foreclosure in 2012. The house was put on the market by the bank in October 2014 for $2.5 MM and went under contract in what appears to be multiple bids after only two weeks. It closed a month later for $2.71 MM, purchased by a man named Tahir Iqbal.

Tahir put it back on the market less than a year later at $4.5 MM. After 5 months they had dropped the price twice, ending up finally at $3.9 MM but it never sold. It was then pulled off the market, probably because Tahir lost the house.

You see… Tahir was apparently a major fraudster, working with another guy named Shaukat Sindhu. The two of them pleaded guilty to multiple counts of fraud in March of this year. The Oakbrook mansion, which was also fraudulently purchased, was forfeited as part of the plea agreement and put back on the market by the government in November. It was listed for $3.3 MM and only took 20 days to find a cash buyer.

I’ve included a slide show of the home below and as you can see it’s quite dated at this point and looks rather commercial. As is typical of distressed homes, but sad for a home in this price range, the photos are just awful but apparently good enough for government work. (I once worked in defense contracting and that was our motto.) Here is the description from the MLS:

WELCOME TO ONE OF THE MOST EXCLUSIVE RESIDENCES IN THE WESTERN SUBURBS, THIS HOME WAS CUSTOM BUILT IN 1997 AND COMINS IN JUST OVER 27,000 SQ FEET ON 3 PRIVATE ACRES IN SOUGHT AFTER OAK BROOK. THIS ESTATE HAS EVERYTHING YOU COULD ASK FOR, TWO POOLS, INDOOR BASKETBALL COURT, THEATER, 1500 SQ FOOT HOME GYM, POOL HOUSE, UNDERGROUND PARKING, THE LIST GOES ON…. THE HOME AND GROUNDS ARE QUITE MAGNIFICENT. PROPERTY DOES NEED SOME UPDATES, HOME IS BEING SOLD AS-IS. ALL INFORMATION IS ESTIMATED, BUYER IS RESPONSIBLE FOR SURVEY. TAXES ARE PRO RATED AT 100%. YOU WILL NOT BE DISAPPOINTED WITH THIS HOME!!!!

Here are the basic stats on the house: 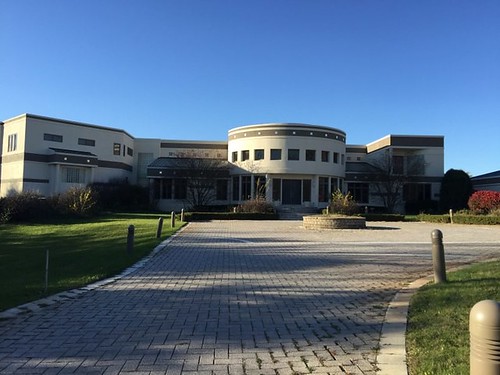