It seems like every time I think Chicago’s foreclosure activity is bottoming out the news gets even better. I just got the Chicago data from RealtyTrac’s June Foreclosure Market Report and if you look closely at the graph below you might be able to see what I can see from looking at the underlying numbers. First of all, the total foreclosure activity is at it’s second lowest level since I’ve been tracking the data. The only month that was better was February of this year and that might have been an anomaly since the subsequent month spiked way up – i.e. activity probably got shifted to the next month.

The other interesting phenomenon is that defaults, which are what start the foreclosure process and are the blue area below, did hit a new low and bank repossessions were within a whisker of a new low. And the only thing keeping auction activity from hitting new lows is probably the need to clear out the foreclosure pipeline. June had one of the bigger declines in the number of Chicago homes in the foreclosure pipeline that we’ve seen in quite some time. It could just be the inevitable consequence of that spike in activity that we saw in March. Getting rid of this overhang of cheap properties is good for the Chicago real estate market. This month’s RealtyTrac report was a review of the entire first half of the year and at the national level the headline is that foreclosure starts hit a 10 year low. That is certainly good news. Their graph below puts it in stark perspective. You can click on it to get to a larger underlying graph if you are reading this on the Web site.

Daren Blomquist, vice president at RealtyTrac, explains what is driving this decline:

U.S. foreclosure starts have not only returned to pre-housing crisis levels, they have fallen well below those pre-crisis levels and are still searching for a floor, down 4 percent from a year ago. Loans originated in the last five years continue to perform better than historic norms, with tighter lending standards and more cautious borrower behavior acting as important guardrails for the real estate boom of the past three years.

However, bank repossessions at the national level actually went up over the last year. According to Daren Blomquist:

Less-disciplined loans originated during the last housing boom continue to account for the majority of distress still hanging over the housing market, with two-thirds of all loans in foreclosure on loans originated between 2004 and 2008. An increasing number of these failed bubble-era loans finally exited the foreclosure process in the first half of 2015, resulting in accelerating bank repossessions that are still well above pre-crisis levels along with record-long average foreclosure timelines for properties foreclosed in the second quarter.

And to give you an idea of what they are talking about when they say the foreclosure times are at record highs they have this graph that plots the average days to foreclose over time. It’s not entirely certain what the X axis represents. I would think it represents when the foreclosures were completed. In other words I think it’s how long it took to complete the foreclosures completed in each quarter.

In the accompanying video in the report – it’s worth watching – Darren Blomquist mentions that properties foreclosed in the second quarter of 2015 had been in the process on average for 629 days! Most likely these properties are the real dredges and are in terrible condition.

You will also notice from the graph that these averages vary quite a bit by state and that reflects not only the different foreclosure inventory by state but also differences in the foreclosure laws of those states. Illinois is way up on the list – around 4th from the top. 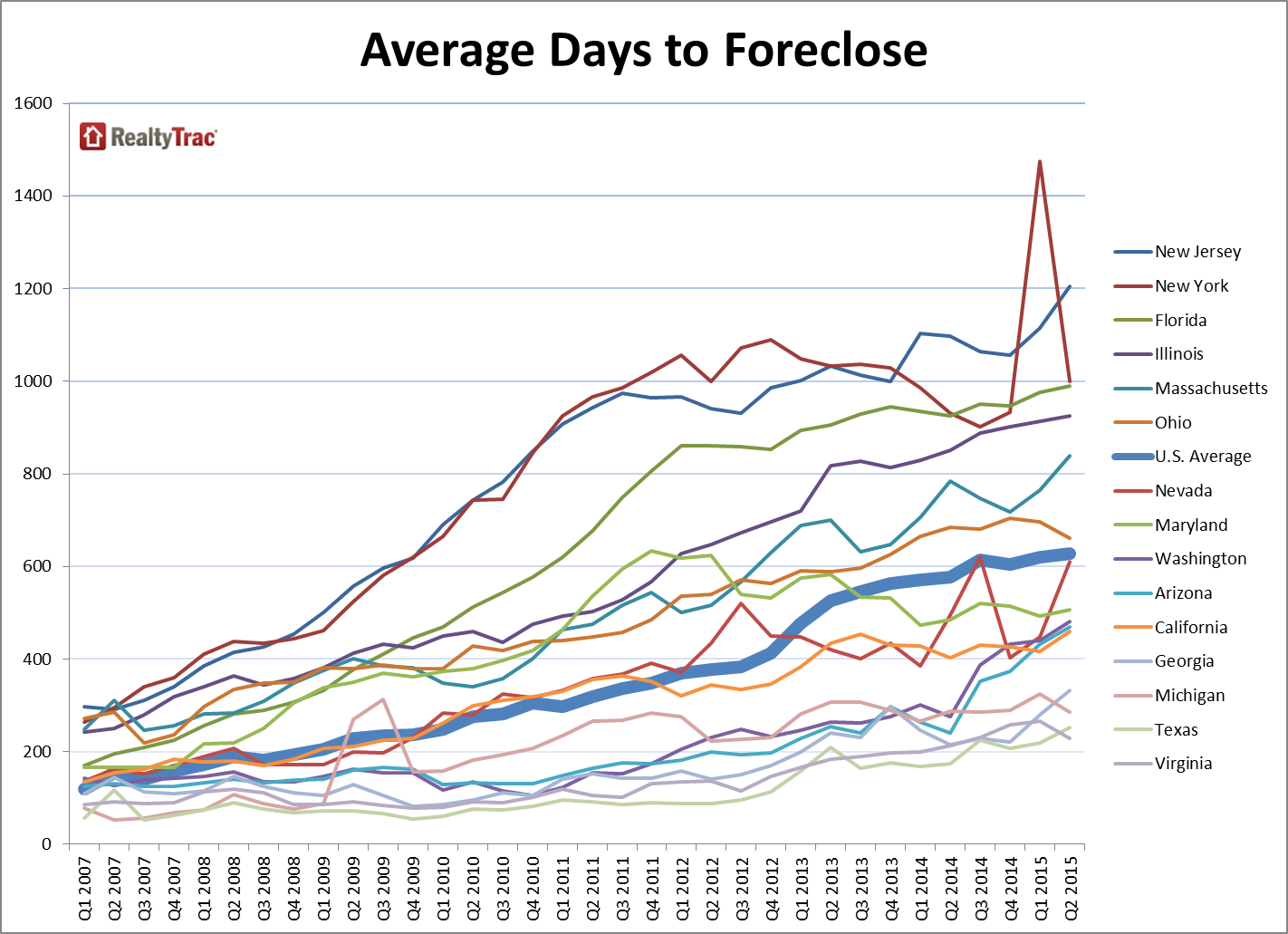