The NAR's Lame Case For Buying vs. Renting A Home 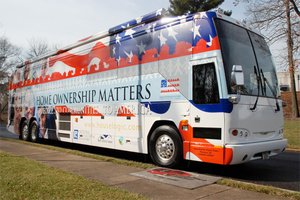 These are scary days for the National Association of Realtors. First the financial markets took away the punch bowl and now the government is getting ready to turn the music off and the lights on. The mortgage interest deduction is under attack and even the biggest fans of giving away taxpayer dollars now believe that Fannie Mae and Freddie Mac need to be put out to pasture.

So if you are the National Association of Realtors what do you do? You launch a Home Ownership Matters PR campaign, the centerpiece of which is a Bus Tour. The bus tour actually started here in Chicago on March 5 at Navy Pier. Did you miss it? I don’t know how. It had to be the biggest thing to hit Chicago in the last decade. If you had been there you would have been able to see…the bus, and tents, and realtors and aldermen talking about home ownership.

As part of this PR campaign the NAR is trumpeting several statistics regarding the social and economic benefits of home ownership in order to help make their case. I have no doubt that all the data presented by the NAR is 100% accurate. The only problem is that you can’t draw any of the conclusions that they want you to draw from the data they are providing. Their use of data is a great example of how to lie with statistics. Here are a few examples.

Don’t get me wrong. Even I’m looking to buy a place now (if I can find something that would make my toughest client happy) but the NAR’s case for homeownership is pretty weak and their case for feeding at the government trough is even weaker. Basically there are three key reasons for buying vs. renting:

If you find one or more of these factors compelling then get on the bus. Just don’t expect the government to help you out. And if you can’t afford to buy a home on your own I suspect you will be just as happy renting despite what the NAR is trying to convince you.