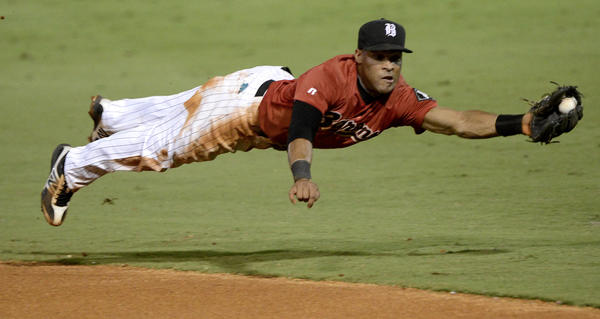 Johnson had a breakout start to 2013 by stealing bases at a mind-blowing rate. His unusual basestealing technique, which involves a walking leadoff, helped him steal 61 bases in 80 attempts in 77 games with Kannapolis in the first half of 2013. Lost in the hysteria around those numbers was the fact that he also hit .342 with a .419 on-base percentage and 34 extra base hits. It's impossible to nitpick the actual production, but he was 22 in Low-A. His July promotion to High-A Winston-Salem set him on a better track in terms of playing at an age appropriate level and his numbers (.275/.309/.360) suffered. Johnson finished 2013 with five games in Birmingham to close the regular season and began 2014 there where he hit .329/.414/.466 to earn a midseason promotion to AAA Charlotte after just 37 games. He cooled off in Charlotte and the loaded infield there led to questions about his defense and flexibility.

Here in 2015, an impressive spring training gave Johnson the edge over Carlos Sanchez and he won the Opening Day second base job in Chicago. And while his hitting wasn't too bad, especially for a rookie in the early going, his defensive issues and baserunning blunders were too much and he was sent back to AAA Charlotte to gain the polish he hadn't yet gotten a chance to add. Micah's hit the cover off the ball back in Charlotte, and he's stealing bases at an effective rate. Defensively, he's still prone to issues, though he's putting in extra work and there are reports of overall improvement. It looks likely that Johnson will get another shot pretty soon, as Carlos Sanchez has been his mirror in the majors (playing excellent defense and not hitting much). Suggestions of a potential move to the outfield don't play out well, as he's not got a very strong arm and his two elbow procedures seem to not go well with having him make much longer throws.

Major League Outlook: Speedy, offense-oriented 2B with some pop
ETA: 2015

Want to know right away when we publish a new article? Type your email address in the box and click the "create subscription" button. Our list is completely spam free, and you can opt out at any time.