In some ways, Jon Lester has become the forgotten man of the Cubs rotation. In 2015, after signing one of the richest contracts in Cubs history, Lester was the center of a media firestorm. A slow start, combined with his difficulty holding runners on, led to more than a few members of the media declaring Lester a bust. With baseball, as in life, the media attention quickly shifted to a different Cub. Jake Arrieta, the so-called number two starter, went on one of the most amazing second-half runs in baseball history. The CY Young winner went 12-1, with a 0.75 ERA, and a WHIP of 0.727 down the stretch. Suddenly, Arrieta had become the ace of a promising Cubs team, a role he has thrived in this season. By spring 2016, Mr. Lester became almost an afterthought, buried under the speculation of the most anticipated Cubs season since at least 2004. So you might not have noticed the fact, that Jon Lester is in the midst of perhaps his best season as major leaguer.

The Tacoma native’s great 2016 campaign actually may have begun at the end of 2015. Over six starts in September and October, Lester posted an ERA of 2.36 and a WHIP of 0.786. This season, he has raised his game to an even higher level: 1.89 ERA, and a WHIP of 0.946 in 13 starts. If these trends both hold, they would be career-best totals. Even by the less luck dependent FIP, Lester’s 2.85 would be the second lowest of his career (2014 was 2.80). Actually, the last three seasons have been the three best FIP for Jon. Last year his FIP 2.92 over performed his 3.34 ERA. So what factors have led to his All-Star quality year? To put it simply, the work of the Cubs on defense during his starts, and increased aggressiveness.

The narrative that Lester is bad defensively is definitely a tired one. The national media made sure to mention it every chance they could the first half of last year, before the Arrieta surge distracted them. The thing of it is, Lester actually is bad defensively: in 2015 he was -8 in defensive runs saved. That tied him for last among qualifying starters with the Brewers Jimmy Nelson. Why did he have such a bad DRS? Lester gave up the most steals in baseball last season with 44. Lester’s inability to throw to first on bunts and weak grounders also was an issue last season. Small-ball attacks could be successful in rattling the big guy, this season however, things have changed.  In 2016, Jon is worth 2 more runs than the average starter in defensive runs saved, good enough for a tie for third place. As far as steals go, he has allowed only 7, on pace to cut his stolen base total by half.

How is this remarkable turn around happening for the Cubs starter? It has been a total team effort for Chicago defensively. The addition of Jason Heyward, a full season of Addison Russell at shortstop, and more starts for Javy Baez have made the Cubs best defense in baseball by DRS. Lowering not just Lester’s, but every Cubs starters ERA. Specifically for Jon, however, the effort has been even more intense. David Ross is throwing more pick-offs to first than ever before with Lester on the mound. It is also hard for teams to steal bases when nobody can get on base. Since returning from injury, Baez has started in all of Lester’s starts, 10 times at third base. Whenever possible, Baez and Ross have gone all-out to field any soft ground balls on the infield, in an attempt to limit the number fielding chances for Lester. It seems to be working, Jon has yet to commit a throwing error, and he is on pace to allow the fewest hits he ever has.

As far as a more aggressive approach from the Cubs starter this season. Lester is throwing the highest percentage of four-seam fastballs since his second full MLB season, (53.6% per Fangraphs). Meanwhile, his cutter usage is down significantly, 6% over last season. He is also throwing more pitches in the strike zone this season, 47% of the time, up four percent from last year. A four-seam fastball is easier to control than a cutter, thus easier to throw in the zone. Interestingly, the number of first pitch strikes is actually down slightly from last season. Where the real change from last year has occurred is on 3-2 counts. Look at the zone profiles from this year and last year on full-counts for Lester. 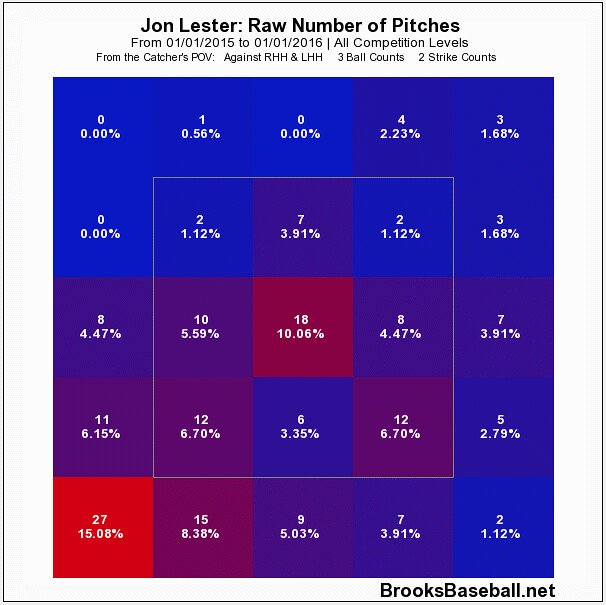 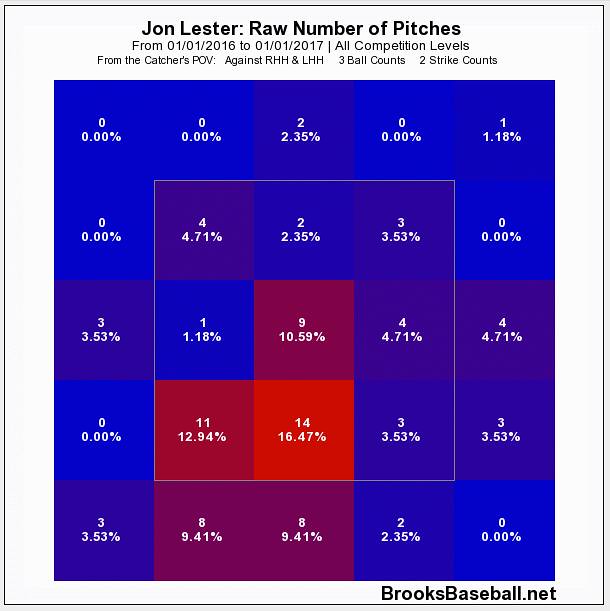 As you can see, Jon is throwing a significantly higher percentage of his 3-2 pitches in the zone in 2016. Thanks to this more aggressive approach, Lester has a career best strikeout to walk ratio of 5.00. The more fastball-heavy pitch repertoire is also changing the kind of contact hitters are making off him. The line-drive rate is falling, while the fly-ball percentage has gone up, leading to more soft contact in the air. The biggest increase is in the rate of infield fly-balls. After a dip in pop-ups last season, Jon is back to career norms.

As a result of these two factors, Lester has the lowest BABIP of his career (2.59). It seems likely that this rate will go up, as will a career high strand rate (85.5%). Still even with some regression, the 155-Million Dollar Man looks like he is earning every penny this season. Arrieta definitely deserves the label of ace, just don’t forget about the Cubs other ace, Jon Lester.