Adam Brown is a friend of the blog and graciously accepted an invite to write this up about Travis Wood. Give him a follow if you don’t already: @SouvenirCity

If you watched the 2013 Cubs daily into the months of August and September, first of all, I admire your passion and dedication. You should probably should have submitted to be part of the Committed campaign last year. I would also strongly suggest seeking help because there’s a strong chance you’re a masochist. There was very little in those final two months of the season that I could derive value from in watching.

One thing that I did plan my viewings around was when Cubs left-hander Travis Wood took the mound every fifth day.

Wood was arguably the Cubs best starting pitcher in 2013. His standard rate statistics of a 3.11 ERA and 1.145 WHIP led all Cubs starters even if you include Matt Garza‘s 11 starts. It was Wood’s best season as a professional even if it did come in a lost season for the Cubs. What we’d like to know going forward is if it’s something we can come to expect from Wood, or just how much regression we should be looking at as he enters his prime seasons from age 27 to 30.

Upon initial review of his seasons as a starter from 2010-2013, Wood’s peripherals are remarkably consistent across that time span. His success can’t really be attributed to good luck along the lines of BABIP. The only statistic difficult to sustain from his 2013 season would be the uptick in his strand rate. His strikeout and walk numbers are in line with his production since 2010. In his first season as a starter, it’s fair to say Travis may have looked to the strikeout too often before becoming more reliant on outs in play. There isn’t any extreme deviation in his ERA to FIP or xFIP numbers either.

Only his 2011 stands out as one as an outlier, much of which can be attributed to crappy luck. An elevated BABIP and a career high BB/9 raised both of Wood’s ERA and WHIP numbers. He probably should have had an ERA closer to 4 than 5. Instead of allowing a runner and a half per inning, the ~1.200 point in his WHIP could have been achieved by some better luck on balls in play and less base on balls.

Even more consistent are Wood’s pitch outcomes. He’s long been a fly ball pitcher which has been a detriment based on the two venues he’s pitched in. Both Wrigley Field and the Great American Ballpark are hitter’s parks, though Wrigley’s mood is highly dependent on the wind. Andrew Koo of BP has a great article written specific to Wood and the wind. While it’s written with a fantasy perspective in mind, there’s details that explain a lot of Wood’s first two months of success in 2013.

Hitters consistently make hard contact about one in every five times when putting the ball in play over his career as a starter. The outlier that marks change in 2013 is his infield fly ball rate which is indicative of Wood’s increasing ability to fool hitters into making weak contact. While adjusting to Wrigley’s Jekyll and Hyde nature in 2012 (lotsa homers, wind blowing out starts), Wood was the beneficiary of the wind blowing in during many of his home starts in 2013 but he also incorporated a cutter into his arsenal for use when behind hitters.

All data derived from the Narnia that is BrooksBaseball.net

The cutter follows a typical usage pattern of in on the hands of right handed hitters and away to lefties. The increased usage of the cutter allowed for Wood to get weaker contact, inducing that career high rate of infield flies, on his sinker, changeup and cutter. From a scouting scale perspective, PITCHf/x guru Harry Pavlidis (Troy McClure would tell you he’s from such appearances as on MLB Network’s Clubhouse Confidential) ranked Wood’s pitches by nastiness on the scouting scale for me. His sinker is a 57, his cutter is a 41 and his changeup is a 36. Each pitch works directly off his fastball with the cutter and sinker deviating about 6 inches off the horizontal plane of his fastball in either direction and the changeup about 8 inches. The vertical drag is what results in the weak contact on his changeup obviously. 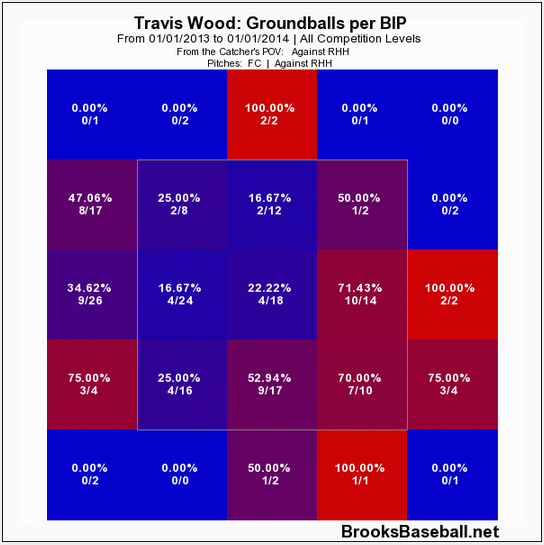 Instead of posting 50 different heat maps, I opted for the one above to show the groundball rate for Wood on his cutter to right-handed hitters simply for effect. A fly ball pitcher getting this much weak contact on a pitch is surprising. My initial hypothesis was that it would be pop-ups that were induced on balls in to right handers. But, I was wrong*. Because when he doesn’t get the ball in far enough, he gets line drives at the same frequency as he does pop-ups (~33%) in that location. I strongly encourage you to go play with the heat maps at BrooksBaseball on Travis because I got lost in them like a 1990s wrestling YouTube wormhole.

An improved arsenal that aids in the deception of hitters leading to weaker contact can only help a fly-ball pitcher like Travis Wood in Wrigley Field. He’s never going to be the ace, or even the #2, on any staff in baseball. What he is entering his age 27 season is a role 6 starter that can be a #3 on this team and a quality complimentary #4 on a competitive team. Every team in baseball needs a player to fill that role.

Now the Cubs just need to figure out the pieces that slot above him.

* – not the first time, certainly won’t be the last either