Cubs Behind the Pinstripes

How Do You Solve A Problem Like Kyle Schwarber?

We all need to brace ourselves for the hefty task that will be consoling our Cubs friends in just a matter of days. The Kyle Schwarber Experiment will be over as quickly as it began, so get ready. We can’t say that we weren’t warned, but it’s still going to hurt on Monday when Schwarber packs his bags and heads out to Des Moines until probably September. And at that point, he’s coming back because the rosters expand to 40 players instead of 25, so even then it might not be a permanent move – who knows, maybe we’ll be watching him return to AAA next spring.

I appreciated the words of Len Kasper during last night’s rain delay, as it took all of one game of Schwarber in the lineup for many among Cubs fandom to call for his permanency in Chicago, no matter what it took. If you didn’t see what Kasper had to say, it started with this tweet that ignited quite a response from his followers. In short, he asked the question of whether fans would prefer that Schwarber had not been called up at all, and instead been sent straight to AAA. It’s an interesting thought, and one that I had not considered prior to Kasper asking it. While it is definitely going to be frustrating when he’s out of the lineup, I think I prefer to have had the chance to see him play even if just for a short time. The bright side here is that we get to see what Schwarber can do, even if it is very, very temporary. Just sit back and enjoy it, but accept that this was laid out in advance. Think of it like a vacation. It’s just a week long, but we kill all of our enjoyment of it if we spend all of that time lamenting that it will one day end.

So far, Schwarber has been darn fun to watch. Even with a three pitch strikeout in his debut, we got to see Schwarber catch an inning. The big excitement, of course, has been what he’s done at the plate in the two games that followed. On Wednesday, he went 4 for 5 with a triple, 2 RBI, and scored 3 runs. On Thursday, he turned around a 96 mph fastball and put it in the seats for his first major league homerun. 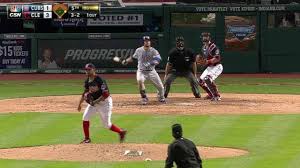 So, while I trust that if Theo Epstein says he is returning to the minors after Sunday’s game then that’s exactly what’s probably going to happen, allow me to propose something. First, let’s not pretend like the best solution is to ditch Chris Coghlan and insert Schwarber into LF. Though Schwarber has spent close to as much time in the outfield as he has behind the plate during his minor league career (57 games behind the plate, 36 in LF), I am not looking to convert him to a full time outfielder. He holds tremendous value as a catcher, but with Miguel Montero signed through 2017, he’s not likely to get regular opportunities there. With that in mind, here’s my probably crazy idea: let him do both. He’s already done it in the minors, so why not continue on the same trajectory in the majors? Get him in the lineup, wherever he’ll fit. Coghlan doesn’t need to be a regular starter (especially with his injury history), so why not give Schwarber a game behind the plate and 2 or 3 games in LF during the course of each week? With the kind of offense that Schwarber is very capable of generating, and given the fact that Joe Maddon seems to value defensive flexibility, this seems like a very workable option. The loss of starts behind the plate for Montero and David Ross won’t keep anyone awake at night, I don’t think. Ross typically only starts when Jon Lester is pitching, so giving Schwarber a look behind the plate at another point during the week still leaves Montero with about 3 or 4 starts a week. Not bad. This could be especially important as off days get more sparse during the summer because of rainouts, and with two doubleheaders in July, our catchers will need a break.

Realistically, I recognize that this probably won’t happen. It would be silly to ignore the fact that Epstein has been very clear about his intentions for Schwarber after Sunday’s game (It doesn’t mean I’m not still bummed about it, okay?), but while we are weeping and gnashing our teeth and peeking at the Iowa Cubs schedule in July and August, let’s remember that we have already seen three top level prospects get called up this season, and may see a fourth (sort of) when Javier Baez gets healthy and makes his glorious return. Oh, and remember Jorge Soler? He’s making solid progress in his rehab from an ankle injury, and we’ll see him in RF again before we know it.