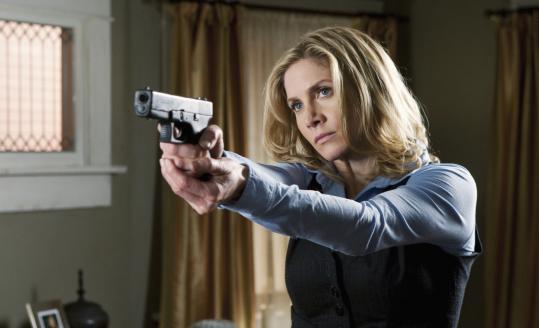 As much as I have ragged on this show all season, the finale last night actually kept my rapt attention and didn’t have any laugh out loud moments.  Granted it wasn’t as exciting as game two of Hawks-Sharks, but it did have climactic moments and tragic character deaths.  Ship’s doctor Joshua gave it up for the cause.  The much maligned Lisa (or Juliet as I am fond of calling her) became one of the good guys and helped out FBI agent Erica Evans who slips unnoticed into the hatchery and destroys all the soldier eggs.  At the same time, intrepid reporter Chad Decker goes unseen into the alien torture room.  If I was “V” leader Anna, I’d just as mad at the lax security as at the “Fifth Column” rebels.  You are going to tell me that with all that technology, and cameras trained to watch the humans everywhere, there is no surveillance of the hatchery with all those important eggs growing.  Now that’s suspension of disbelief.

As the season ends, the real question is whether Ryan has been converted back to the dark side or is he faking it, and will Hobbes betray the Fifth Column for money?