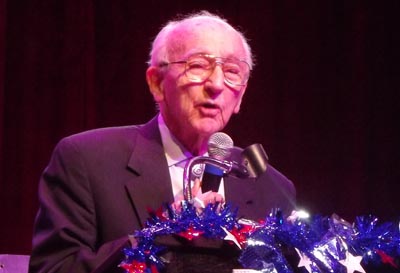 I have been made aware that the great Jack Roeser passed away last night. This is a great loss to conservatism in Illinois, but Jack was in his 90s and in delicate health, so it isn't a surprise, sadly.

Mr. Roeser was very generous with the fortune he built from the ground up as owner of Otto Engineering, a high tech firm located in Carpentersville, Illinois.

Roser was a hard charging conservative and often made folks both left and right mad at him for his choices of causes and candidates, but he was also unapologetic and fearless. In this day and age when people are always mewling and apologizing for their actions, you have to admire a real adult like Roeser making his choices and sticking with them regardless of the "consequences."

And rarely did he have to face any troublesome consequences, either. He made his decisions and that was that and despite this he was a much sought-after ally in Illinois politics.

Roser was one of the "greatest generation" having served in WWII, but when he came home he didn't turn into one of those liberal pantywastes that gave us the Baby Boomers, or as I call them the worst generation. Roser built wealth, created jobs, and improved his community. He is the sort of man that we should all hold up as an example to our children.

As to his politics, Roeser was there with Reagan and helped fund most of the conservative activism in the state ever since. He was also a great enemy of the teachers unions that have helped destroy our system of education in Illinois.

Roeser was also the host of a weekend WND talk show as well as the host of ChampionNews.net.

So, rest in peace, Jack Roser. We thank you for you long service to the community. May others seek to emulate your example.

Here is a statement on Roeser's passing from ChampionNews"

"Jack Roeser has passed away at the age of 90. While we are saddened by the loss of our leader, we are inspired by his convictions and the spirited battle he fought, seeking to bring change to Illinois. Jack believed in “little government and big people” and lived the American Dream. He will be missed but never forgotten."

Here is a little bio film on Mr. Roeser made not long ago...

Christy and I would like to offer our prayers to Jack's family. Jack was an unsurpassed giant in the conservative movement. He was an expert at translating the principles of conservatism into everyday actions and set the bar high for all of us. His entrepreneurial spirit and business success is a model for those in pursuit of the American Dream. His passion for education reform and ensuring that every child has an equal chance at succeeding was well known. He fought hard for accountability in the school system to ensure that all students received the education they deserved. He never wavered in the cause to ensure that the vision for limited government by our Founding Fathers was observed and respected. Jack will be greatly missed.