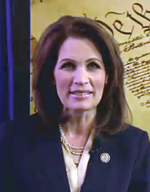 The left's latest unfair, false, and downright scurrilous attack on Michelle Bachmann focuses on her Tea Party response video aired after President Obama's State of the Union speech last week. I am a bit late to this story, I realize, but I wanted to get it aired here regardless.

The left's claim is that Michelle is too stupid to understand how TV works because she was not looking into the camera as she delivered her comments. Further, the left (and some uninformed conservatives, too) are saying that Bachmann is dividing the Republican Party by delivering the speech at all.

Both claims are flat out false. Taking the latter first, Bachmann never intended this speech to be a widely distributed and broadcasted speech. It was meant as an address to the Tea Party group that sponsored it. The address was sponsored by Tea Party Express and Tea Party HD, directed and Produced by Tony Loiacono. It was originally meant only to appear on the Internet. It was not supposed to be broadcast on TV.

However, at the last minute CNN asked if they could also broadcast the address. Tea Party Express and Bachmann agreed. So, Bachmann did not intend to horn in on the GOP's response to Obama's SOTU speech. Her address was originally only meant for the Tea Party group that contracted for it.

As to the first charge, the word is that CNN was originally going to tap in to the Tea Party Express feed, but the cabler made a last minute decision to set its own camera up off to the side. CNN's feed also zoomed in with an unnatural closeup shot instead of the wide shot that Tea Party Express used.

If you look at the ACTUAL camera that Bachmann was using you see a nice wide shot and you'll see that Rep. Bachmann is looking right into the camera like she should be.

So, the odd feel about the video was not Bachmann's fault. It was CNN's. If one were prone to conspiracy theories, one might assume that CNN muffed the video presentation on purpose so that Bachmann would look bad.

And how is the left spinning CNNs failure to do right by Bachmann. Check out this entry by a left leaning blog...

Watch this with the sound muted. Notice how Bachmann is speaking not to the camera, but to a point somewhere to the right of it? The real message here is "what I'm saying doesn't matter, what matters is I'm directing it to the real Americans; and you're not one of them."

This is as dishonest an analysis as one can get (granted I don't think the blogger realized what was really going on here). It is a fantasy based on hate, not facts.

This meme assigns CNN's incompetence to Bachmann and absurdly makes of it some shadowy, underlying context. If you want wild-eyed conspiracy theories, THIS is a perfect candidate for such.

Here is the actual video that Bachmann made for Tea Party Express:

Here is the one more people are familiar with showing the incompetence of CNN: