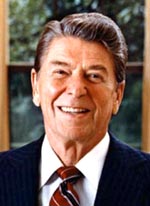 This Sunday, February 6th, marks the 100th Anniversary of the birth of Ronald Reagan, our 40th President, and a towering, visionary figure in the history of the Republican Party, the United States and the free world.

The Republican National Committee is celebrating this milestone with a special website devoted to President Reagan. The website will feature video tributes to The Gipper throughout the week from Republicans leading up to his birthday. I hope you will join in the Centennial Celebration by signing our birthday card to President Reagan and joining the conversation about keeping his legacy alive using the Twitter hashtag #Reagan100.