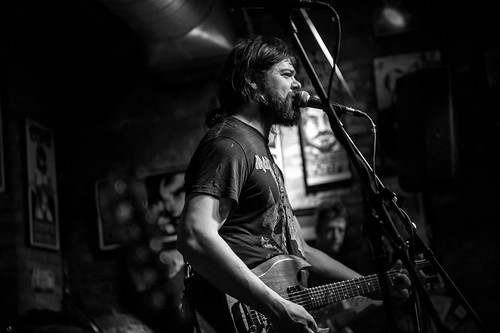 Last week I made it out to Reggie's to catch local Chicago band Umbra and the Volcan Siege. Led by Jim Licka, Umbra and the Volcan Siege have an interesting sound that oscillates between heavy rock and rather unmelodic atmospheric rock, reminiscent of Mogwai. It's definitely one of the more unique Chicago bands. There are plenty of opportunities to see them, as they are playing a set at Reggie's the first Wed of every month for the foreseeable future. Check them out on facebook and twitter.

You can see the photos from their April 1 Reggie's set on Flickr or in the below photo gallery. All photos by Jamie Bernstein. Licensing info for individual photos is on Flickr.