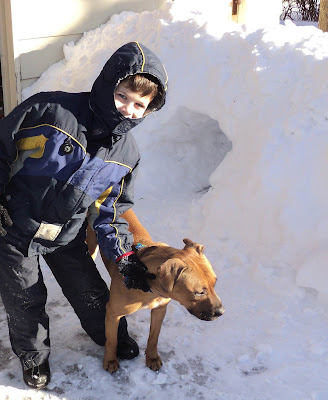 When I tell people that I have three boys, they say: “That must be a zoo.” And while it does seem to be a little zoo-like at times, I think I have a more appropriate analogy. It’s really more like a kennel.

Like dogs, boys can be man's best friend. One-on-one they are lovable, playful, and accommodating. They come when you call for them and they follow commands pretty well. As long you show them attention, play with them a little bit, throw the ball around with them in the yard so they get some exercise, and feed them regularly, you couldn’t ask for a more loyal companion. When you have one boy, he can pretty much roam the house at will. Mi Casa, Su Casa, son.

Now add one more boy to the house and see what happens. At first they sort of sniff each other out (with boys, sometimes this can be literal) and get a lay of the land. If you watch them closely, and I mean very closely, you can keep the situation under control. They may nip at each other a bit, they may growl or bark, but for the most part if you closely supervise both of them, you’ll be fine.

Add a third boy to the mix and you might as well call animal control. Supervision is no longer possible. At best, you hope to contain potential destruction. Prepare yourself for this. You’ll need to be in shape, you’ll need to think fast, and you’ll need to have some sort of snack in your pocket at all times.

These pack animals (boys) have a system. A favorite trick is to go in three different directions at once, to throw you off their tracks. You'll have to make danger assessments on the spot. Where are they headed? Who can cause the most damage? The best you can do is follow the most dangerous one, and keep an eye on him, but don't forget to keep an ear out for the other two. No matter where they were heading, now that you’ve chosen to follow the dangerous one, the other two are regrouping somewhere.

This inevitably leads to the fight to see which one is the alpha dog. This won't be quiet. You'll have no choice; you have to leave the dangerous one to break up the fight. They have sharp teeth and can do major damage if they aren't seperated immediately.

While you break it up, however, the dangerous one gets loose and begins hunting for danger. He’s got the nose for it, and he’ll find it.

You can't worry about that at the moment because you've got a fight to break up. Herd the growling combatants into separate corners and take them on one at a time. Don't forget to keep your cool. Time is ticking--the dangerous one is loose and unsupervised.

The fighters can be returned to that perfect companion pretty quickly with a little positive reinforcement. Simply remain calm, show them attention, and ignore the strange noises coming from the kitchen while you get boy number one calmed down. Sometimes a hug works, but I’ve discovered that a playful belly rub, or a “whose my good boy” works better. (They also like it if you rub them behind the ears) If not, don’t forget about the snack in your pocket. This is a good time to pull it out.

Here’s a little tip that I’ve learned from years of experience: Always turn around on your way out of the room at least one more time to let them know you mean business. Say it with authority.

That's what happens before mealtime. When they start smelling what you're making in the kitchen they will usually come begging. They'll pant as they pepper you with questions...

This is usually when you snap and scream: "SIT!"

The scenario I’ve described above is what happens in my house every day between 4:00—6:30 p.m. or so. After the boys come home from school and before my wife comes home from work, it’s complete bedlam. And this is within the completely controlled confines of our home. What do you think happens when we have to do something in public?

Let’s just say that I no longer judge parents who buy those leashes. They make sense on so many different levels.